Poland was the 18th most visited country in the world in 2019, coming just ahead of the Netherlands with over 21 million tourists. Who would think? What brings the visitors here? Everybody has heard of Auschwitz and the tragic history of World War 2, but the cultural heritage of Poland extends well beyond that which manifests itself in 16 entries on the UNESCO World Heritage List. What are they and how special they are in comparison to the rest of the world? Let’s dive in!

You will find part 2 here.

When in 1978 the first UNESCO list was published only 12 entries made it onto the list (now there are over 1100!). Two of them from Poland! The historical centre of Kraków comprises the Old Town of Kraków, the Wawel Castle, the Kazimierz district (commonly referred to as the Jewish district) and the Stradom district connecting all the aforementioned. It is fairly compact coming at just 150 hectares, making it very walking friendly. It comes with a very useful space markers: the green belt of Planty garden stretches all around the Old Town so you can never really lose yourself, the Wawel Castle towering just in between the Jewish District and the Market Square tells you where to find the river Vistula and the characteristic bridges at the edge of Kazimierz mark the vantage point into the Jewish ghetto of Podgórze. You can easily squeeze two basic tours in one day: one of the Old Town (read and book here) and the second of the Jewish history of the city (see here). What sets Kraków apart from many other old towns in Europe are: 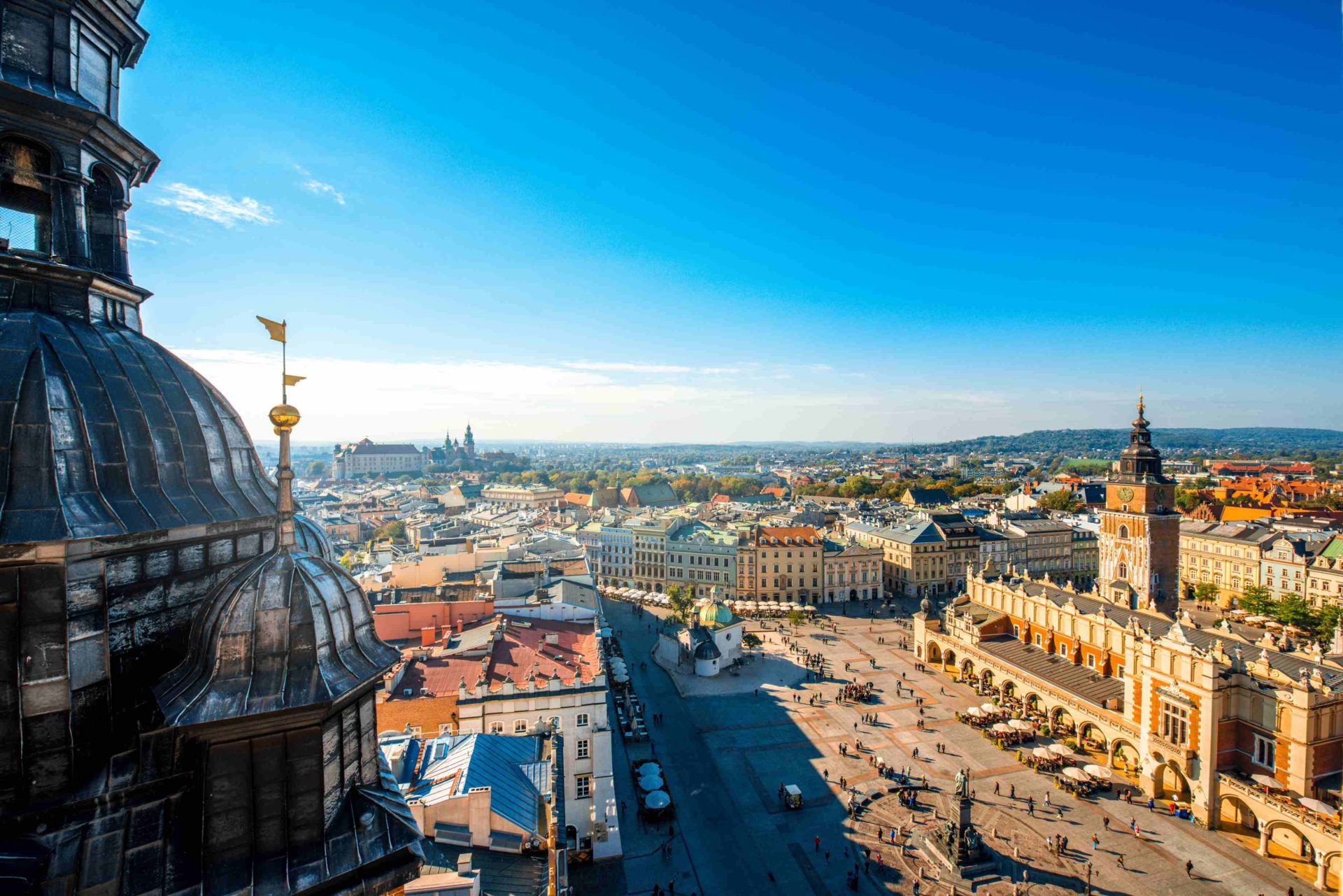 Kraków's Old Town with the Wawel Royal Castle on the horizon.

This is an interesting one: Wieliczka was inscribed in 1978, but Bochnia, despite being older, was only added in 2013. Both were established in the 13th century and both have been operating ever since! They are unique - although salt mining might sound pretty uninspiring it is actually quite the opposite here: the salty kingdoms of the mines are not only sets of tunnels, but grandiose chambers in between them filled with history, art and wealth. Yes, salt was indeed a very expensive commodity, not only did it serve as a spice, but above all helped preserve food - after all where does the term “salary” come from? In 14th and 15th century the mines near Kraków made up to ⅓ of the national treasury income! Both mines are accompanied by small, pretty towns where you can grab a coffee - Wieliczka even boasts a “Salt Castle” - a medieval structure where the governor of the mines lived. 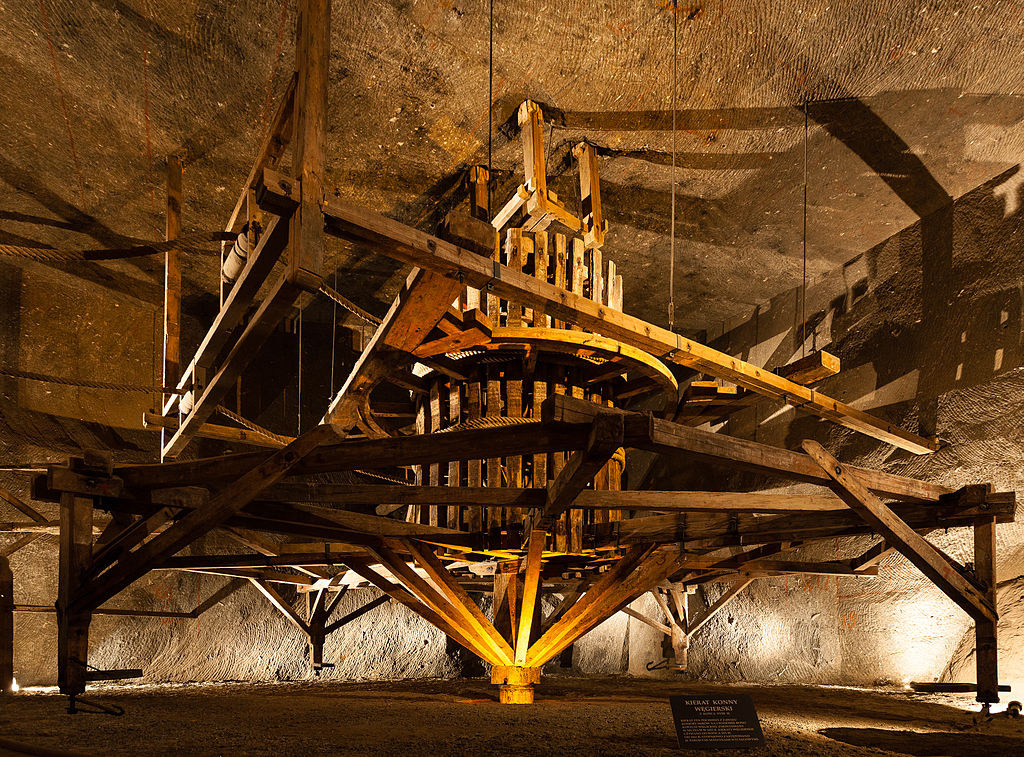 Listed as “German Nazi Concentration and Extermination Camp (1940-1945)” and commonly referred to as just “Auschwitz” this place might just be the most commonly known historical place in Poland and a must for the first time visitor. It might seem that the place needs no further introduction. It is clear though that we must teach ourselves about the scary, disturbing and uncomfortable truths in order not to forget and repeat it ever again. World War 2, Hitler’s rise to power, antisemitism, complicity. And then compassion, help, risking your life for others. And remembrance. All this at once can be lived through by visit to this place.

Preserved in a relatively good shape, Auschwitz-Birkenau serves as a museum today and is easily reachable from Kraków for a day trip (how to get to Auschwitz). The place comprises 3 different parts, the two main visiting sites being Auschwitz I with the infamous gate and inscription Arbeit macht frei and Birkenau, the main killing ground, where most of the gas chambers and crematoria were localized. Relatively well preserved it serves as a gruesome, but needed reminder of one of humanity’s greatest failures. If you would like to learn more about the Holocaust and how it unfolded outside camps, in cities and ghettos established in them try the Jewish and World War 2 tours in our cities. 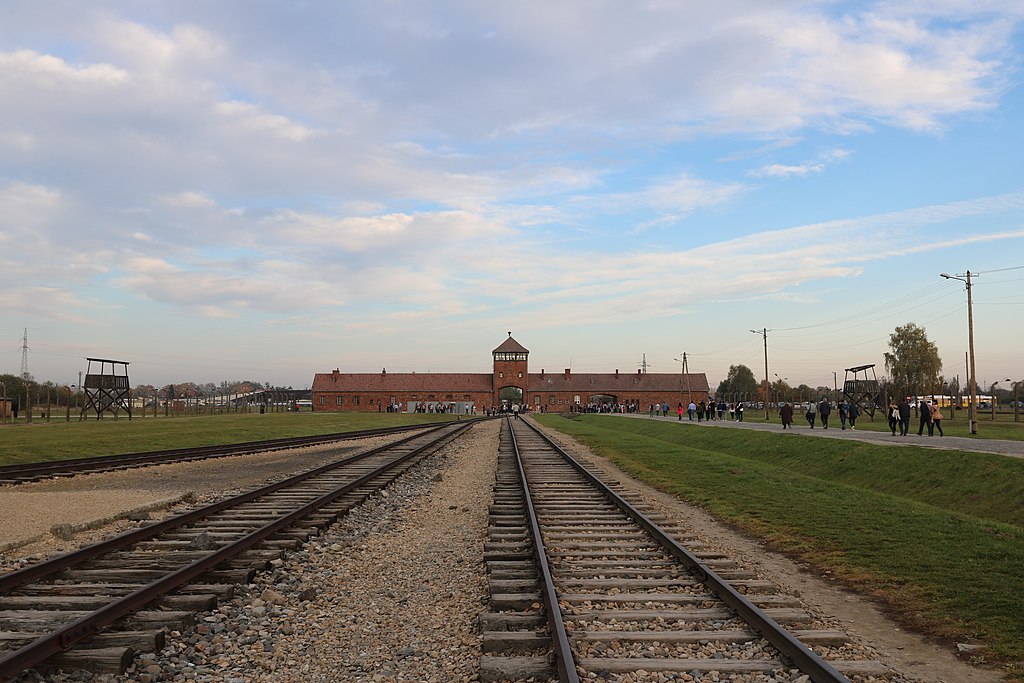 Poland’s only natural entry on the list is Europe’s oldest primeval forest. Shared with Belarus, the Białowieża Forest is one of the last pieces of the former European forests. Once served as a hunting ground of the kings of Poland and Grand Dukes of Lithuania the place was under special protection for most of its existence and today hosts a very rich ecosystem of Europe’s oldest and largest trees and animals - the symbol of which is the European Bison.

A small part of the forest near the village of Białowieża can be visited - the trail includes a small museum and a walk through the forest. Rich biodiversity of the site manifests itself in 59 species of mammals, over 250 bird species, 13 amphibians, 7 reptiles, and over 12,000 invertebrates species!

Apart from European bison this is one of the few places in Europe with a sizable population of European lynx and wolf. The bison, known as żubr, once resided in most of northern Europe, but its population got extinct: in England already in the 12th century, in France by the end of the 14th century and in Germany in the 16th. Almost extinct by the end of World War 1 (when it was hunted down by the German and Russian armies and poachers), found its refuge in the Białowieża Forest and today the population accounts for almost 3000 specimens and is the largest one in the world.

These are the most representative Polish tourist attractions: that does not mean they are the only one, but if you are looking for a place to start this might be the good idea. Feel invited to peruse through our blog and website to find even more ideas for a perfect visit to Poland! 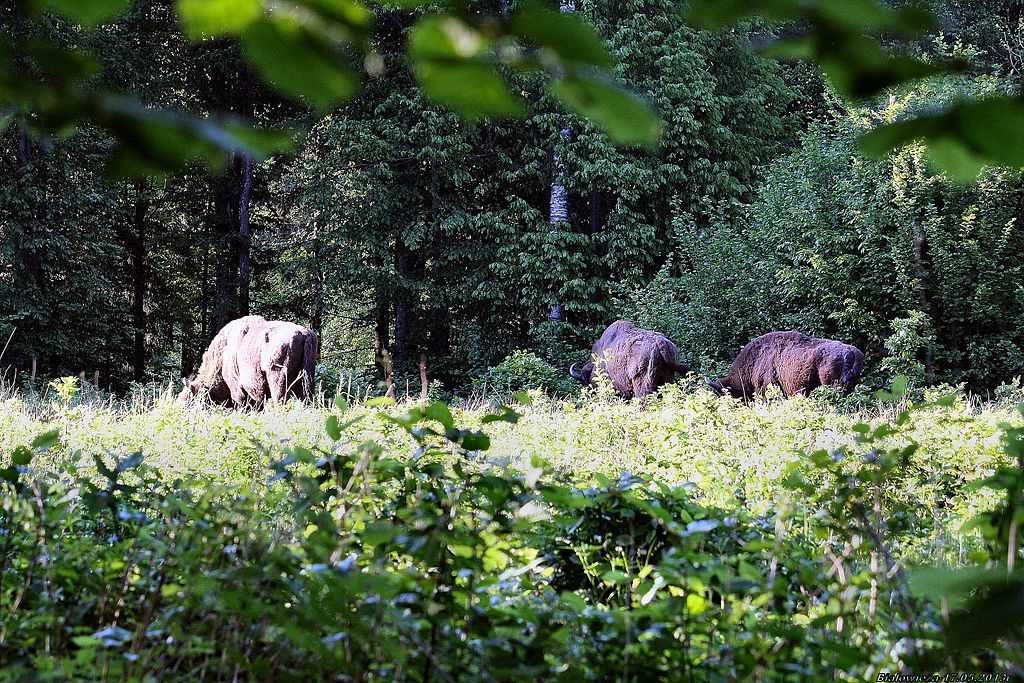 It is strange to think that Warsaw’s Royal Castle, boasting the paintings by Rembrandt or Poland’ only publicly owned Stradivarius, was only restored by 1984, yet already in 1980 the site where it stands and the adjacent Old Town and Royal Route entered the UNESCO World Heritage List.

Actually, the Old Town itself was almost fully reconstructed over the late 1940s and 50s. As was most of Warsaw - one of the most WW2-damaged cities having around 80 to 90% of its substance destroyed and close to 100% of the population either killed or expelled.

Yet despite it all the people returned and the historic centre was rebuilt - using old and new techniques and basing the reconstruction on the old paintings by Marcelo Baciarelli - to shine as the example of human drive for beauty and renewal. And for that reason, as the only new architectural complex, it was included on UNESCO list, which makes it more unique than any other old town complex in Europe. But not only that: it also serves as an inspiration and influence - hence the recent reconstructions of the baroque Frauenkirche in Dresden or the Stadtschloss in Berlin.

The historic centre of Warsaw is made of the Old Town (established around 1300), the New Town (also planned in the Middle Ages), the Royal Castle with the adjacent square and the Sigismund’s Column (which serves as the meeting point for our tours!) and the Royal Route, the ceremonial road leading up to the Old Town. This is where a big part of Warsaw’s economical, political and social life happens. It’s colourful, red roofs abound and only a more thorough look reveals its strange, tragic and not so distant past. Look for it together with us during the Old Town Warsaw tour! 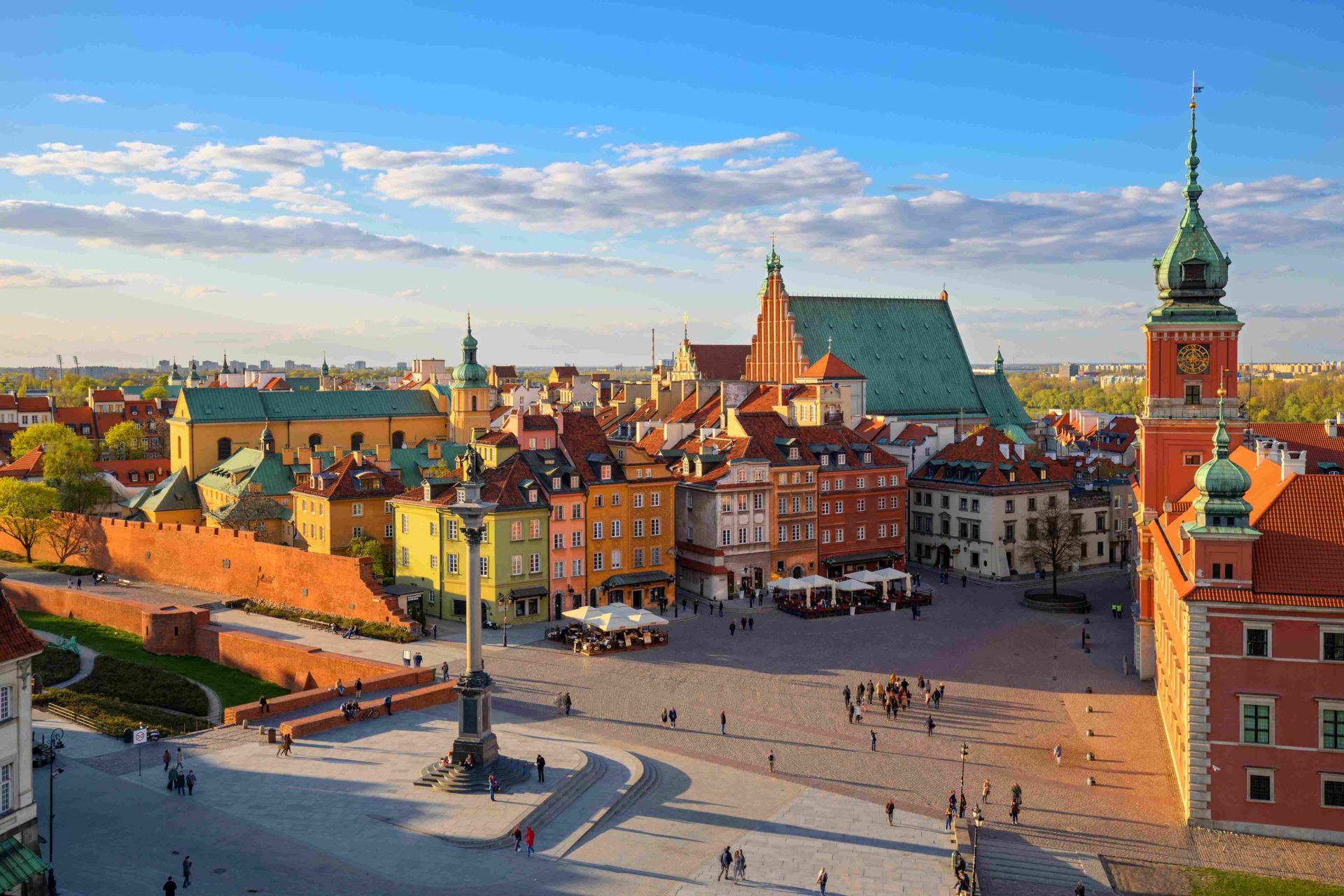 Based on the Italian ideas of an “ideal town” Zamość is a perfect Renaissance city located in the east of Poland. Established in the late 16th century and built by a single architect it was the capital of a strange state within a state established by one of the richest people of his time, chancellor Jan Zamoyski, and named after him.

In the city you fill find:

The place is also very close to the Roztocze National Park famous for its well-preserved forests and wild animals like the eurasian badger, boar, red fox, red deer, European beaver and Polish pony. The gateway to the Park is the picturesque town of Zwierzyniec with its famed brewery and the church on the island. 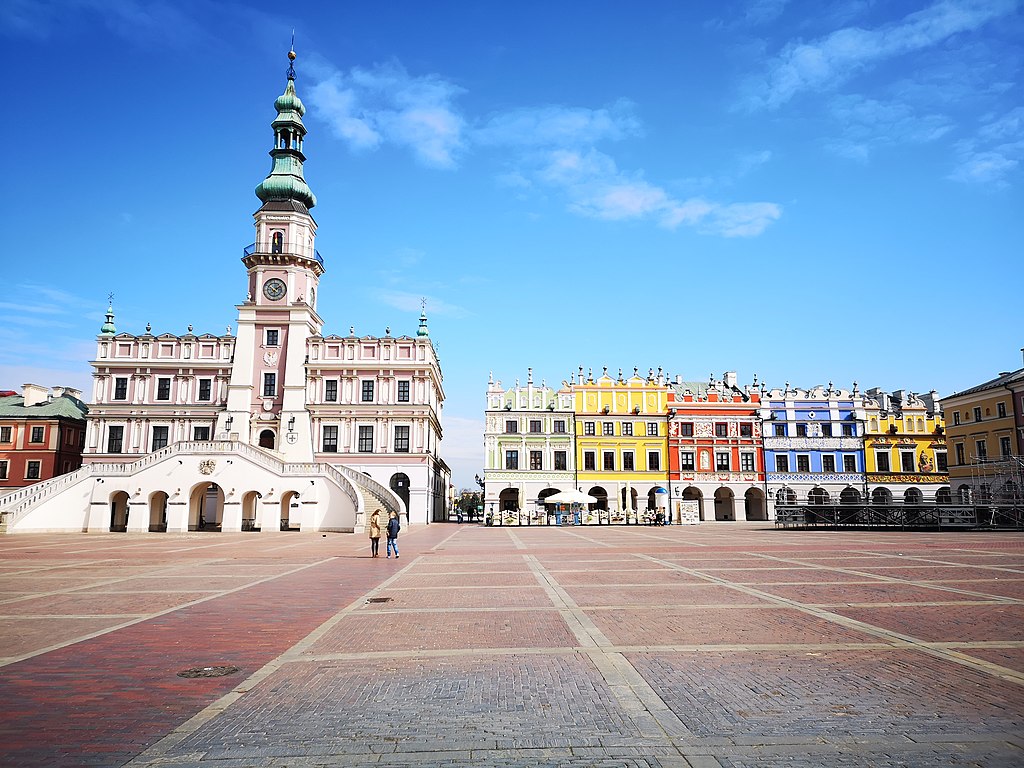 Dubbed “the largest medieval castle in the world” and indeed being so as the Guiness List of Records confirm! This enormous, measuring 21 hectares structure is a major tourist attraction of northern Poland. Being located a 30 minutes train-ride from Gdańsk (no excuse not to take some of our tours there!) it is an easy recommendation for a day trip from the capital of amber. The castle was built by the Teutonic Knights over the 13th and 14th century under the name of Marienburg. Who are those knights, you wonder? Well, you have certainly heard about the crusades and the Knights Templar. That order, created to serve the Christians in the Holy Land during the crusades, was mostly French-oriented one. The Teutonic Order, established in 1192, was a primarily German-speaking entity. Well, it actually still is! In contrast to the Templars, the Teutonic Knights still exist and work! Today they are mostly engaging themselves in charity - among their most famous members are the likes of Konrad Adenauer and the emperor Franz Josef II.

Back to the castle - it is built of the red brick and towers above the river Nogat, a tributary to Vistula. The construction is a typical example of Gothic castles erected by the German Order in the time when they settled in what is today north-eastern Poland, or formerly, Prussia, after leaving Jerusalem following the failure of the crusades. It was captured by the Polish Kingdom already in 1466 and remained in relatively good shape until WW2, when it was destroyed. Meticulously renovated and partly reconstructed, the castle was introduced to the UNESCO World Heritage list in 1997, yet the reconstruction is still an ongoing process so each time you visit there is something new to see.

The might of the Teutonic Knights extended well outside Malbork and you might still visit other imposing castles and towns established or influenced by the order: Gniew, Reszel, Nidzica, Ostróda and dozens more. The power of the Order might have dwindled with the rise of the Polish Lithuanian-Commonwealth over the 16th century, but their heritage is here to enjoy. 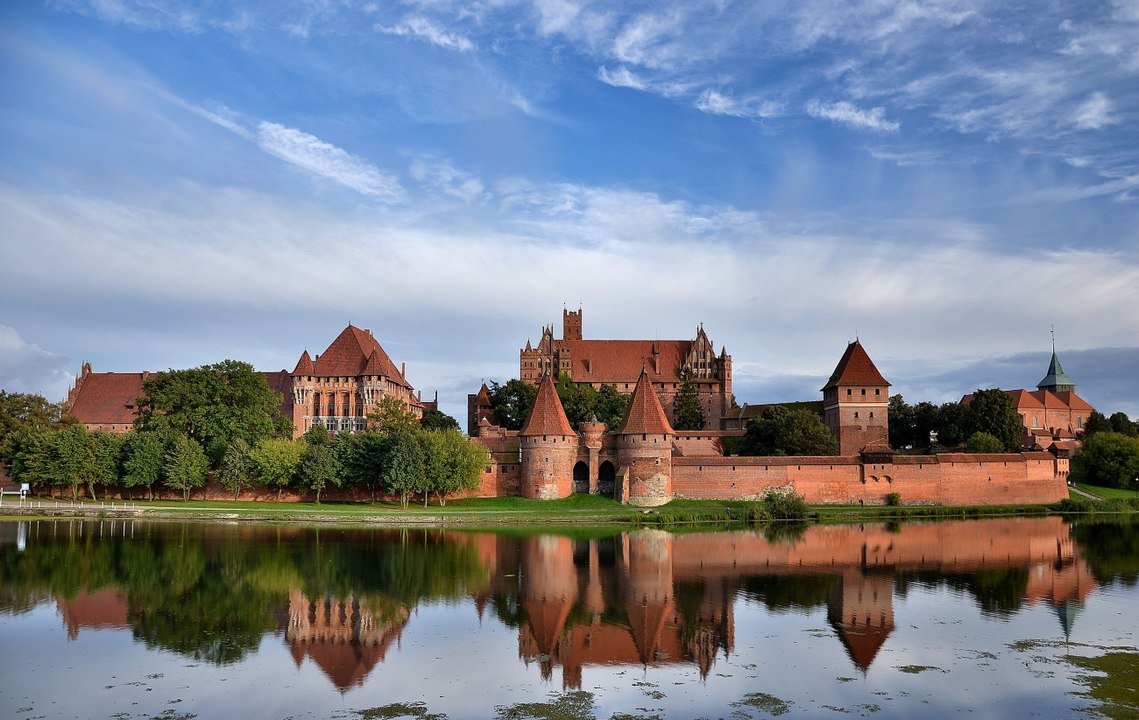 Similarly to the Malbork Castle, the gothic town of Toruń also belongs to the Teutonic heritage of Poland. Established in 1233 and expanded by the so called New Town in 1264 it also boasts a German Order Castle, albeit partly destroyed in the 1454 uproar against the knights by the townspeople. Mostly using red brick and stone as material the town, located on the Vistula river, is a precious collection of gothic architecture: townhouses, churches, the town hall and city walls. It is particularly pretty at night from a vantage point across the river which one can reach by crossing the Vistula using an imposing, 900 metres long, Piłsudski Bridge.

Apart from being a perfectly preserved medieval town Toruń is a home to Nicolaus Copernicus, known in Polish as Mikołaj Kopernik. The famed astronomer, who proposed that it was the Earth and other planets going around the Sun, was born here in 1473. There is still his family house to visit and you can see the famous man all over the place.

One more claim to fame of Toruń is its gingerbread - Toruńskie Pierniki is a renowned brand of sweet treats and can be bought anywhere in the country, but only in Toruń you can visit the Museum of Gingerbread and participate in workshops making them! If you are planning to visit Toruń be sure to join our tours there! You will reach Toruń from Gdańsk or from Warsaw easily, see you there on our tours! 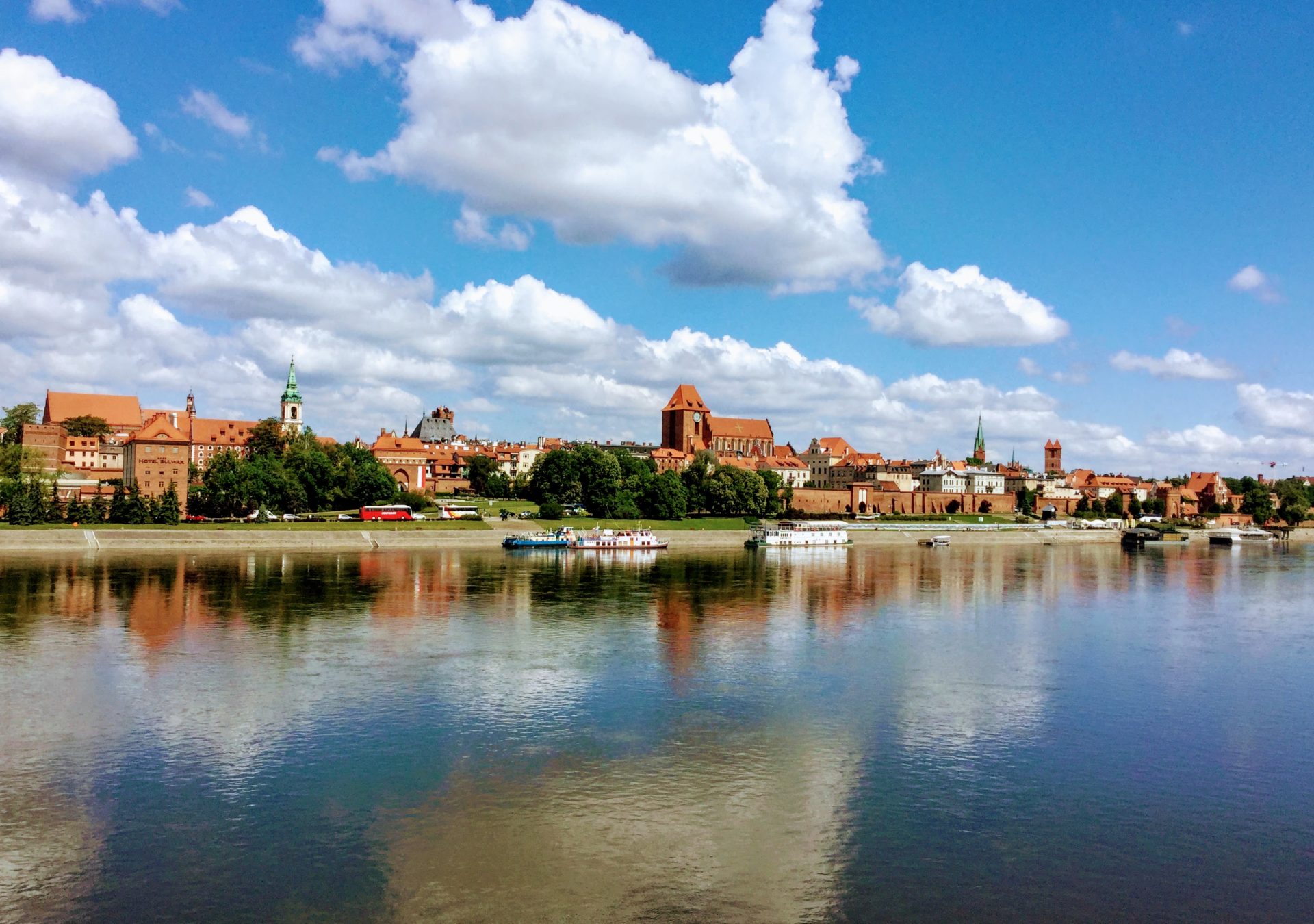 Panorama of Toruń Old Town across the Vistula.