The German cuisine is not only beer and sausages. It is also... other types of meat :). With potatoes. And some interesting sauces. It has also a lot of fine street food. Generally, due to Berlin’s multinational character, there is a huge variety of dishes you can find in the German capital. But we will focus on those things that are considered to be typically German. 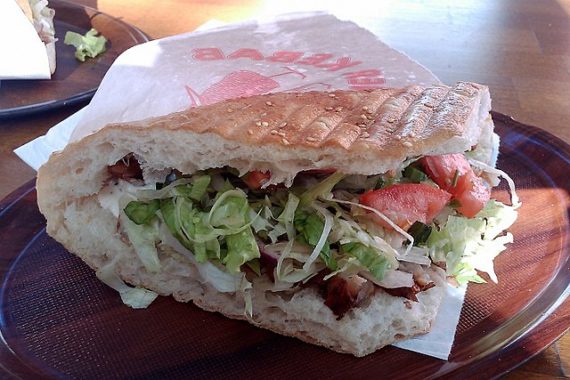 “Kebab” sounds, looks, and tastes oriental (in the sense of the Near or Middle East). In Turkish cuisine, the word refers to something grilled or roasted on a skewer: typically it is meat or fish, but it can also be some vegetables. “Döner” in Turkish means “turning” or “rotating”. Interestingly, the dish known as döner kebab, in its current form, actually appeared in Germany, most likely in Berlin. There was a massive migration movement of Turkish (as well as of other nationals) workers to Germany in the 1960s and early 1970s; they were called Gastarbeiter, or “guest workers”. The Turkish community soon became and has remained the largest. These people brought their idea of roasted lamb or other meat on skewers to Europe. But it was in Germany where they began to “sandwichize” their “rotating meat”. How? By putting slices of meat in pita bread, wrapping it in lavash or flatbread (dürüm), adding vegetables, and then seasoning all that with different sauces.

The success and popularity of this dish was enormous. It quickly spread to other countries in the West. As a result, kebabs (short in British English) or Döners (as they are often called in Germany) have become a pan-European kind of street food. Today, multiple versions, including vegan Döners, can be found at every corner in Berlin. It is a truly local food with a migration background (mit Migrationshintergrund) and taste.

Being in Berlin and not trying this Westernized piece of the Ottoman cuisine is a cardinal sin for a gourmet! You should not even worry about grease meat, sauces, or thousands of calories in there... For some salad on the top will always make you feel as if you are eating healthy. 😉 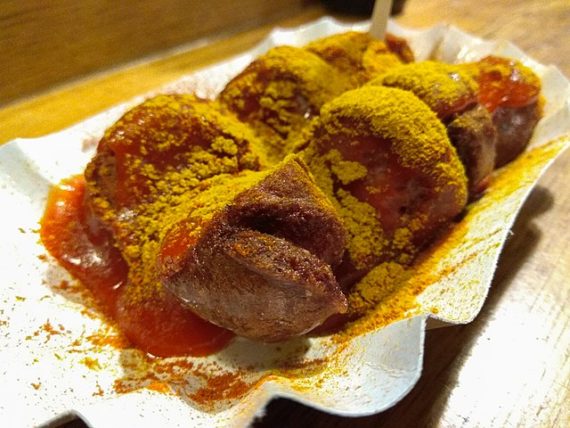 “Don’t worry, be Curry!” :). Currywurst is probably the most famous street food in Berlin! It is a national dish in Germany. Currywurst consists of a hot pork sausage cut into slices and seasoned with curry powder and ketchup. Served with chips (french fries) or Brötchen (German bread rolls). So simple, so tasty. Also very cheap and can be found everywhere in Berlin. Attention: can be extremely spicy.

The dish was invented in Berlin. It appeared in the post-war period in a British sector of the divided city. A local lady, her name was Herta Heuwer, mixed up Indian curry powder with English Worcestershire sauce; then she added some ketchup which was becoming more and more popular in Western Germany due to the presence of American soldiers. This “curry-ketchuped” sausage, initially sold at street stands in Charlottenburg (district of Berlin), became so popular that it quickly spread to other regions of Germany. In fact, today this dish is so important to the German cuisine culture that there is a museum of currywurst in Berlin (not far from the famous Checkpoint Charlie). 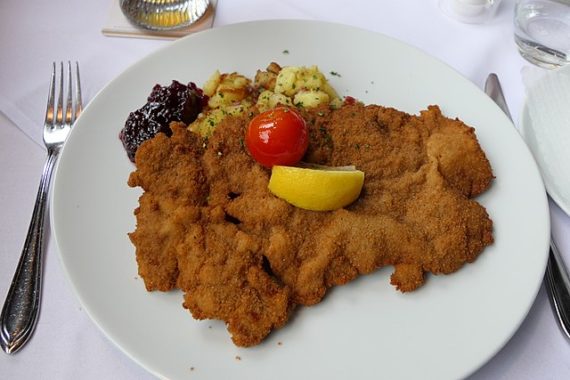 For many, there is hardly any more German dish than Schnitzel. The word comes from an Old German “snitz” which meant “to slice”. In Germany, it consists of a fried thin slice of veal. Sometimes other meat can be used, like pork, chicken breast, or even soya meat. The most typical variant is actually from Austria. It is known as Wiener Schnitzel (Vienna schnitzel) which is a veal cutlet (always veal) dipped into flour, egg and breadcrumbs, and then fried. 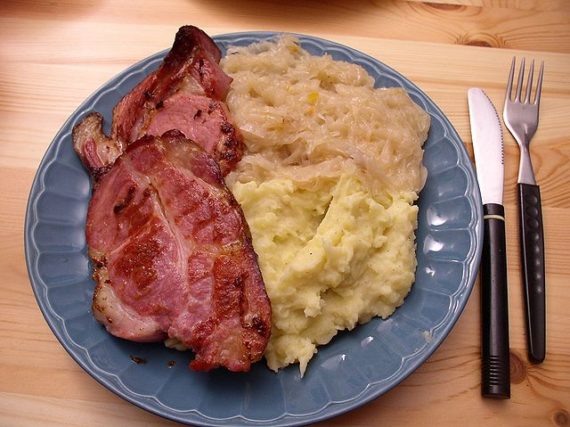 Kassler, or Kasseler is a lightly smoked and salted loin of pork. It can also be called “gammon steak”. It is typically served with Sauerkraut or sometimes with potatoes.

It is not entirely clear where the dish got its name from. One theory says that it might have come from the French word casserole which is a flat-bottomed and high-rimmed dish. In the 18th century, about 20% of Berlin’s population spoke French (read more about the Huguenots in History of Berlin). Another popular theory mentions the city of Kassler in Central Germany. But most likely, the dish appeared in the 19th century in Berlin and was invented by a local butcher whose name was Cassel. 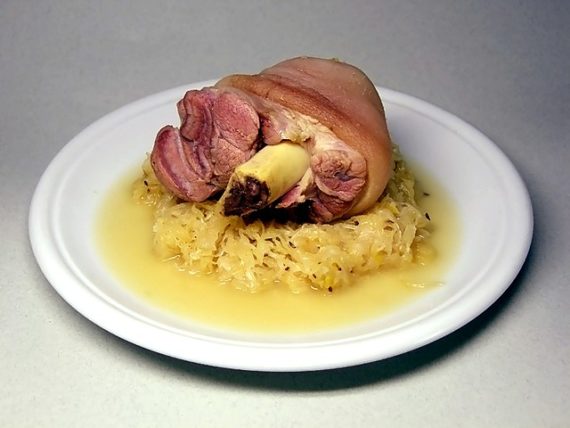 Eisbein literally means “ice leg” in German. A curious theory states that the name refers to a hip joint which was once used for the production of ice-skates. The dish is a ham hock, normally pickled and cured or boiled. This pork knuckle has different names in different parts of the German-speaking world. Eisbein is the most traditional German name, especially in the North-East; Hachse, Haxe, Haxl are used in Southern Germany; in Austria the dish is known as Stelze. Likewise, slightly different recipes and accompanying dishes will be found depending on the region. In Berlin, it is most often served with pease pudding. 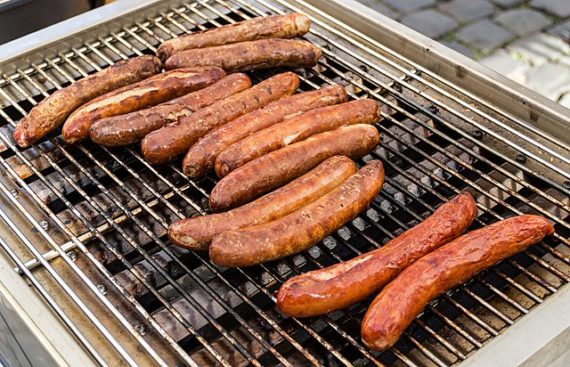 An article on the German cuisine would be incomplete if only one sausage dish is mentioned. Bratwurst (from braten (“to fry”) and Wurst (“sausage”)) is a type of small pork sausage, typically fried or grilled. Perhaps more associated with Southern Germany (like Bavaria region), bratwursts are often the most common thing at a barbecue anywhere in the country. You cannot get more German than that. 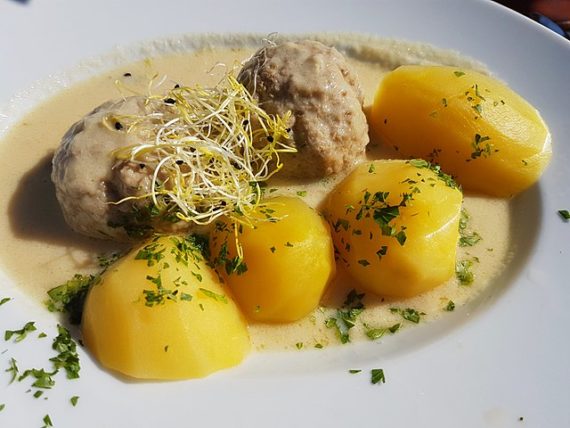 Königsberger Klopse are basically meatballs that are served with capers in a white sauce. It is one of the most recognizable regional dishes in Germany. Interestingly, in communist GDR calling them Königsberger Klopse was avoided for political reasons*. Instead, the name “boiled meatballs” (“Kochklopse”) was officially used. Like many other German dishes, these Klopse are accompanied by potatoes, although sometimes rice is served instead.

* Königsberg (“royal hill/mountain”) was a Prussian city in Eastern Europe. It was annexed from Germany by the USSR after World War Two. Today the city is known as Kaliningrad (named after a famous Soviet communist Mikhail Kalinin). It is part of the Russian Federation.

Eier mit Senfsauce, or “eggs in mustard sauce” is a typical German dish eaten with potatoes (Kartoffel). Eggs can be either boiled or poached. “Mustard sauce” here is the must-thing. The sauce is usually poured on top. The idea probably came from Northern Germany. The dish may look and seem too simple, that is because… it is so! 🙂 But good cuisine does not always have to be exquisite. Nothing too fancy. Just tasty. 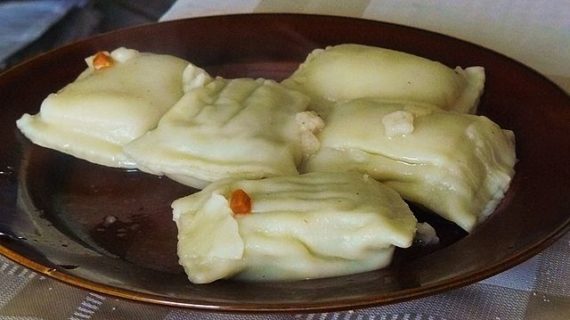 Maultaschen literally means “mouth bags” or “mouth pockets”. It is basically pasta stuffed with minced meat (mostly pork or beef) and some vegetables, like spinach. (Yes, Germans also like pasta. :)) This dish is originally from southwestern Germany, the region known as Swabia. You can compare it with Italian ravioli, Polish pierogi, Ukrainian varenyky, Russian pelmeni; however, Maultauschen are significantly bigger in size than all of the mentioned above. 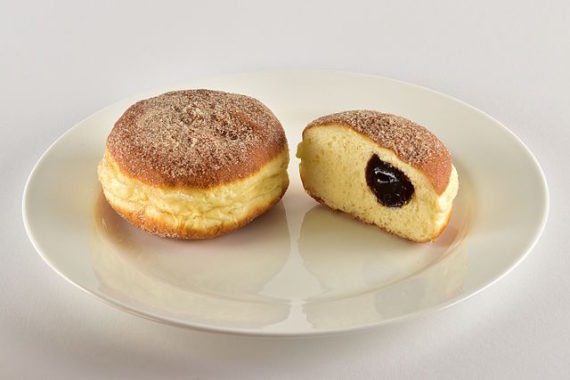 If you say “Berliner” in English, you either mean a person who was born and/or lives in the German capital, or a doughnut with jam or some other sweet filling and vanilla icing. The latter has no hole like typical American doughnuts do. Icing is usually sugar or vanilla. Filling can jam, chocolate, or cream. It is undoubtedly one of the most German desserts that has hundreds of years of history (the earliest written recipes date back to the 16th century).

Funny fact. “Ich bin ein Berliner!” is a soundbite that has become one of the most captivating phrases in modern German history. It was said in 1963 by an American President Kennedy who was delivering an inspiring speech in West Berlin (at the Schöneberg City Hall) in front of half a million people. After that speech, many jokes appeared in America about ein Berliner. Some people suggested that using this phrase with an indefinite article “ein” (“a(n)”) is understood by the Germans as “I am a (Berliner) doughnut” instead of “I am a Berliner (citizen)”. Actually, it is a misconception, for there is nothing wrong about the message and its grammatical form for a German ear. Besides, proper Berliners (natives of Berlin) do not use the word Berliner in the sense of a doughnut anyway. The term “Pfannkuchen” (“pancake”) is used instead. 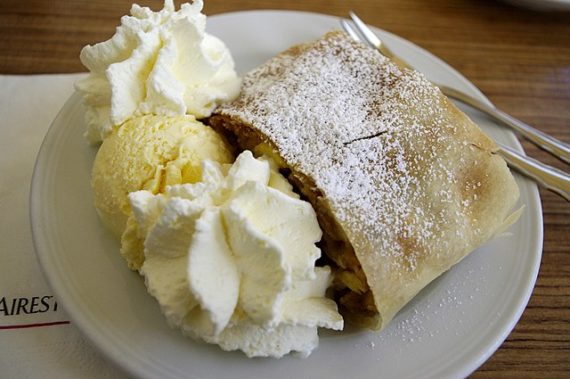 Apfelstrudel, or “apple strudel” is another super popular dish in the German cuisine that comes from Austria. The German word “Strudel” means something like a small “whirlpool”. The dish consists of a thin pastry that is rolled up round a fruit filling and then baked. Raisins, cinnamon, or sugar can be added. All that is usually served with some toppings, like ice cream, vanilla, custard, or whipped cream. The dessert originated in the capital of the Habsburg Empire - Vienna - and then spread to the rest of the monarchy and neighbouring countries. As a result, today it is very popular not only in the German-speaking countries, but also in Central and Eastern Europe. Apfelstrudel is a perfect sweet course to finish your meal.