We use Cookies.
Walkative!BLOGhistory & more
Life beyond Auschwitz and communism – Jewish community in Poland today
#Jewish life in Poland #Jews in Poland
Share:

27th of January marks the anniversary of the liberation of Auschwitz-Birkenau camp by the Red Army. This day was chosen in 2005 to commemorate the horrors of the Holocaust and thus the International Holocaust Remembrance Day was established.

During the times of pandemic it is impossible to hold ceremonies commemorating the liberation at the former camp or visit the memorial in Auschwitz-Birkenau in person. Still, if you want to learn about what happened there and pay tribute to many murdered in the camp you can make a virtual visit at: http://panorama.auschwitz.org

Panorama.auschwitz is a way of making a virtual visit to Auschwitz-Birkenau memorial.

But is there today more to Jewish Poland than the rich past and the tragedy of the Holocaust? Let’s start with saying that if we were to turn back time and move to Poland from 1980’ it would seem that all is lost. After the Holocaust and the rule of communist regime those few Jews who lived in Poland back then when asked about the future would answer in astonishment: “what future? We are here to turn off the lights”. Yet, after thirty years that have passed since those days, things look quite different. So let’s take a closer look at what exactly happened within this time.

After Auschwitz - a small portion of history

When the Second World War ended out of 3,5 million Polish Jews that lived in Poland before the war only 10% were still alive. Most of them survived in the Soviet Union. After the war the returns began. People were in search of their family members, trying to reestablish their pre-war lives. But at the same time the country devastated by the war, poverty and Nazi propaganda saw the rise of antisemitism and anti-Jewish outbursts. Many survivors would then decide to leave and never come back.

Still, there were those who stayed believing that the new communist system would bring the changes and a new beginning. With time they were gravely disappointed. The communist regime would eventually turn against Jewish Poles and with time gradually force them to leave or hide their Jewish identity.

The culminations of those attacks was the anti-semitic campaign of March 1968. That was a time of a crisis and fight for power within the leadership of the Polish communist Party, accompanied by student protests against censorship and anti-Jewish persecutions. Following the Arab-Israeli War in 1967 the Jews in Poland were labeled “Zionists'' and enemies of the state in accord with Soviet Union's support of the Arab states. Fighting the students’ revolt the authorities would launch anti-intelligentsia and anti-Jewish campaing resulting in depriving Jews of their positions and jobs and finally expelling about 20 thousand people of Jewish origins from the country in the following years. 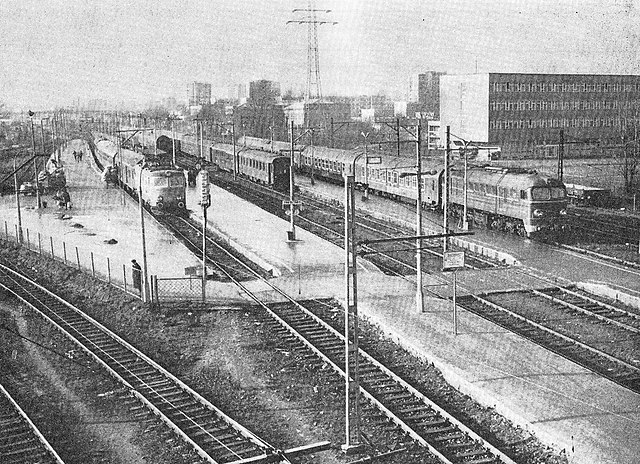 The Gdańsk Railway Station (Dworzec Gdański) in Warsaw has become a symbol of the events of 1968. Many people forced to leave Poland then would depart from here.

Those who stayed in Poland despite the campaign were very few, either elderly or carefully hiding their Jewish background. And this was the landscape of Jewish Poland at the end of the communist regime.

The wind of change

Things started to change for the Jewish community of Poland coinciding with the big political changes that the country and the entire region was going through in late 1980’. The collapsing communist regime was no longer able to keep its guard high. Foreign ideas and people started to penetrate the country. People in Poland started to cross the borders outlined before by the communist propaganda. The exploration of “white stains” within history, both in the big picture and the small, family one, had begun. People started to raise questions that before couldn’t be asked: questions about identity and ethnicity. The long forgotten (and forbidden) subject of Jews and Poland was taken up again. Intelligentsia and with time the general Polish population started to explore the richness of Polish-Jewish history and cherish it. At the same time young Jewish Poles for the first time started to organize themselves - it was finally easier and more acceptable to be different, the country was not forced to be artificially homogenous anymore.

But this outburst of new initiatives, organizations and associations could not happen without help - and it came from American and international Jewish organizations. With the needed infrastructure it was easier for many to come forward. Those who for years knew they were Jewish but didn't have a place to express themselves or those who were just finding out they had Jewish background. Most of them needed to learn what it means to be Jewish. Often their parents raised in communist Poland were secular and grew up cut off from Jewish traditions that their parents wanted to hide from the world as it could possibly be dangerous. Many people finding out they were Jewish were not sure what to do with those newly discovered revelations. They needed answers but they also needed options. 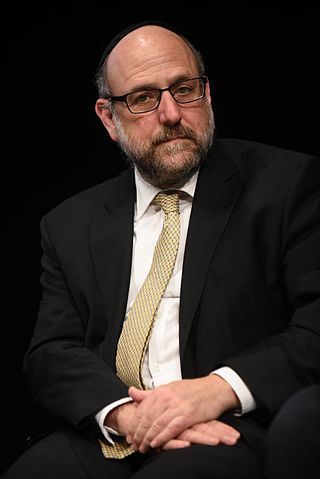 Michael Schudrich, Chief Rabbi of Poland. Originally from New York, he moved to Poland at the beginning of 1990'.

Jewish life in Poland today is concentrated in several cities and around several institutions.

First of all there are the official Jewish communities associated in the Union of Jewish Communities in Poland. It gathers 8 independent communities in: Kraków, Warszawa, Poznań, Szczecin, Bielsko-Biała, Katowice, Łódź, Wrocław, there is also a branch in Gdańsk. Those communities are orthodox. But there are many more options for those who want to live Jewish life in Poland: from othodox to progressive and reform, especially in big cities like Warszawa and Kraków. 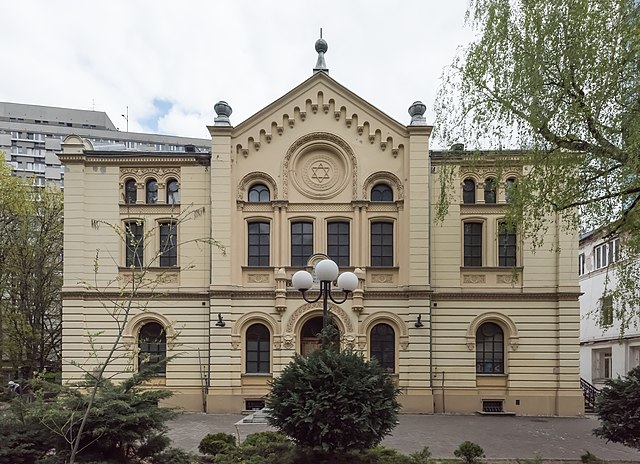 Nożyk Synagogue, the only synagogue in Warsaw that survived World War II. A place of worship for the Jews of Warsaw. 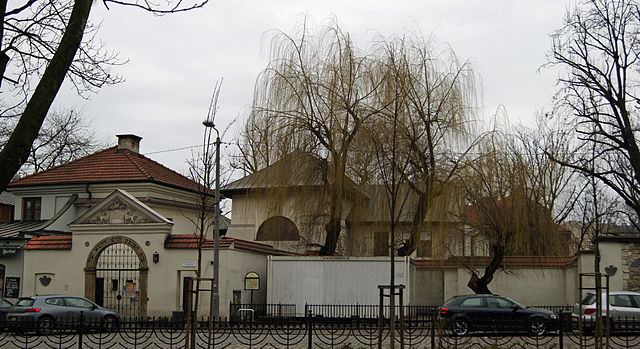 Remu Synagogue in Kazimierz, historical Jewish district of Kraków. One of active synagogues in Kraków.

Besides religious, there are also a number of secular organizations that cater for the Jewish needs in Poland, let’s name here the most important.

In Kraków and Warszawa there are the JCCs. They both provide friendly and welcoming space for their local Jewish members to gather, spend time together, organize all sorts of classes and events. Some of these are also open for non-Jewish audiences. Jewish students are organized in Hillel, which is an international student organization. For the fans of sport there are the Makkabi sports clubs in both cities. 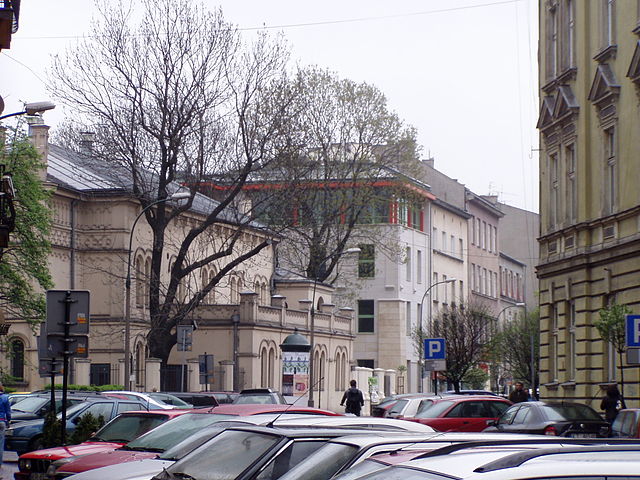 Temple Synagogue and JCC Kraków building at the back.

In Warsaw and Kraków the community also established preschools and schools. Warsaw was the first - already in 1989 several Jewish families established Jewish preschool, the first one in Warsaw since 1968. At the beginning there were only 7 kids at Lauder-Morasha preschool, now there are about 60. Following kindergarten, the first primary and high school was established. In 2016 JCC Kraków, located in the heart of the historical Jewish neighbourhood (we visit it during our Jewish tours, join us and book it here), established the first post-war Jewish nursery and kindergarten in Kraków.

The biggest and the oldest secular Jewish organization that exists in Poland is TSKŻ (Social and Cultural Association of Jews in Poland). It was established in 1950 and remains active till the present day. Now it has 16 branches in different cities across Poland with the main one located in Warsaw, at Grzybowski Square. This square was once a vibrant Jewish area with a number of Jewish organizations located there (we visit it during our Jewish Warsaw tour, join us and book it here). 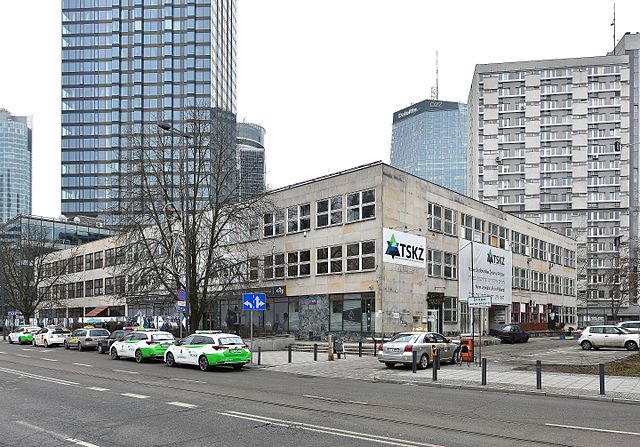 The former seat of the Main Board of TSKŻ at Grzybowski Square in Warsaw.

And finally - how big is it?

Probably there is a question you all wanted to ask from the beginning of this article - so what is the number of Jews in Poland today? I left it for the end because, to be honest, nobody really knows. The numbers usually given range between 20 up to 50 thousand. But, because of all the reasons described in the article, no one is really able to give a precise number.

One is certain though - now, after some 25 years from the moment when changes started, the Jewish community in Poland is strong, has its own voice, ideas and plans for the future. It is not a very big community but it is definitely a mighty one!

All the processes described in the article are very complex, but important to understand the Jewish Poland. We discuss them widely on our Jewish tours. If you want to go deeper into the subject and visit places where Jewish life concentrates today take one of those tours: Jewish Kraków, Jewish Warsaw, Jewish Łódź or World War II & Jewish Wrocław.

Photos used in the article come from the resources of Wikimedia Commons.