Sachsenhausen concentration camp was built in 1936 just outside the Third Reich capital Berlin. The idea was to design a model for all future camps in Nazi Germany. By the end of the Second World War, about 200.000 people were interned there, mostly political prisoners, “socially undesirable” (Jews, Roma and Sinti, homosexuals, Jehovah's Witnesses) as well as Polish and Soviet citizens. At least 30.000 people were murdered in the camp, most of them were Soviet POWs. Today the former Nazi concentration camp is a museum and a memorial site. It is located in Oranienburg, a town some 35 km (22 mi) north of Berlin.

Visiting Sachsenhausen is a perfect one-day trip for those who stay in Berlin and want to learn more about the history of the Second World War and the Nazi regime. In order to grasp the context of your visit better we recommend joining our Welcome to Berlin and Communist Berlin free tours.

But how do you go to Sachsenhausen from Berlin?

First of all, we highly recommend you to download and use a VBB Bus & Bahn app which is a perfect trip planner for Berlin and surroundings.

The first step is to get to the town of Oranienburg. Both S-Bahn and regional trains can take you from any major station in Berlin to the railway station "S Oranienburg Bhf" in less than an hour.

If you want to travel by urban rail service (S-Bahn), you should look for S1 train (all S-Bahn lines are marked green on the map), S Oranienburg Bhf will be the final stop. The best spot to catch this train in the city centre is the Brandenburger Gate or Friedrichstraße. There will be many stops (more than 15) on the way, that's why the journey will last approximately 50 minutes. S1 trains run every 20-30 minutes.

If you want to save time, then better take a regional train (for example, RE5 that goes to Rostock), it will take you to the S Oranienburg Bhf in less than 30 minutes. The main railway station in Berlin (Hauptbahnhof or simply Hbf.) or Potsdamer Platz Bhf. is where you catch RE5 or some other regional trains.

Whatever option you choose, it is very easy to get to Oranienburg. It will be a matter of 40 minutes to 2 hours depending on what time you start your journey and where you are in Berlin.

At S Oranienburg Bhf (railway station) you take the bus #804 or #821 to the stop "Sachsenhausen Gedenkstätte" (which is a German word for "memorial"). The museum is just a couple of minutes walk from that stop. The journey by bus is very short, some 5-7 minutes,

By the way, if you don't want to wait for a bus, you can simply.. walk! It's just a half an hour stroll. Oranienburg was very heavily bombed during the Second World War, so there's not so much to see on the way, but walking is always healthy. Besides, why not to use the chance to see one more town in Germany? 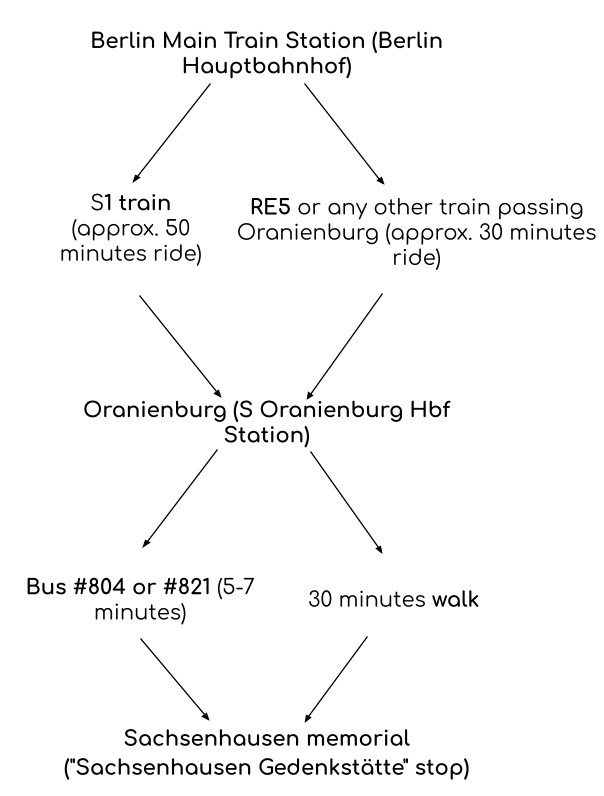