Walkative! commemorates the orphanage in the Krakow ghetto – 75 years after its brutal liquidation 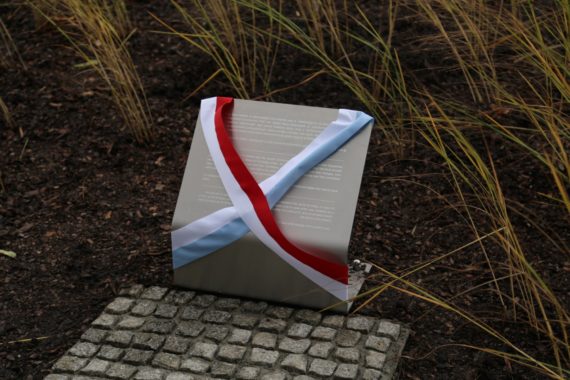 In 2017, Walkative! celebrated its tenth anniversary. We all agreed that the best way to celebrate would be to do something positive for the city we guide through and love. After long discussions, we have decided to commemorate the orphanage in the Krakow ghetto. The story of Jewish children and their guardians is one of those we tell on our regular Jewish Krakow tour (more about the tour you can read here). It always moves our listeners. Over the years, also for us, telling about the fate of children from the orphanage has become extremely important. Unfortunately, the building of the orphanage from which the children were taken to their deaths during the October 1942 deportation does not exist. So we have decided to fund a plaque commemorating the children and employees of the Institute for Jewish Orphans. 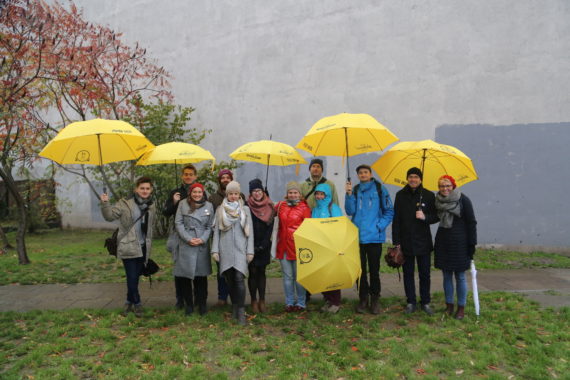 Kraków Walkative! team at the site of the orphanage.

A bit of history - the ghetto in Podgórze

During World War II, in the area of ​​Krakow's Podgórze district, the German authorities established a "Jewish residential district", as the ghetto was euphemistically called. It was here, at ul. Józefińska 41, in a small, probably one-story building, where the Institute for Jewish Orphans was located. On October 28, 1942, during a brutal deportation, about 200 children and their guardians were taken out of the orphanage. The guardians decided not to take advantage of the Germans' offer to abandon their charges and stay in the ghetto. Those who stayed with the children were, among others, the long-term caretaker of the Institute for Jewish Orphans in Kraków, Dawid Kurzmann, and the head of it, Anna Feuerstein. They were murdered together with their pupils in the death camp in Bełżec.

In the post-war years, as a result of the reconstruction of the intersection of Na Zjeździe, Józefińska and Limanowskiego Streets, the building that once housed the orphanage was demolished. There is no trace of it left. Recently, many buildings in this area have been marked and described - there are information boards with details indicating which institutions operated in them during the ghetto's existence. The orphanage building does not exist, and therefore has not been commemorated. We decided to change it.

Commemoration of the orphanage in the Krakow ghetto

Throughout the summer of 2017, Krakow Walkative! guides run Polish tours and all the income from them was used to finalize our goal - to fund a plaque commemorating the orphanage in the Krakow ghetto. Thanks to the commitment of the entire team, we made it! The project was also supported by members of the Anti-Defamation League. 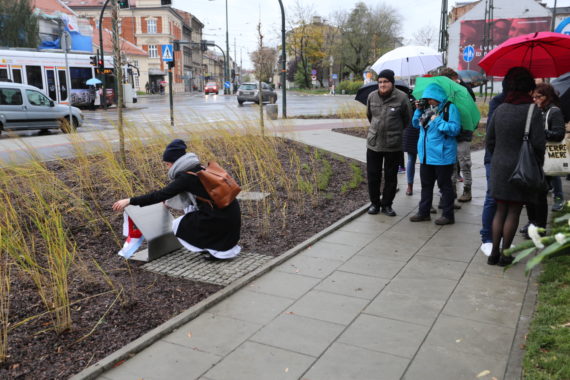 The area around the plaque was beautifully prepared by the Krakow City Greenery Authority and on October 29, 2017, the plaque was officially unveiled. During the ceremony, in the place where the building once stood, together with the people who gathered we planted flowers - yellow crocus bulbs. Thus, we joined the Krokus Project coordinated in Poland by the Galicia Jewish Museum. The participants of the project, mainly young people, plant yellow crocus bulbs, which, blooming in spring, are to remind people of Jewish children who murdered during the Holocaust. Thousands of people all over the world are involved in the project. We intend to continue planting them and hope that one day the whole area where the building once stood would be covered with yellow flowers in spring!

This was not our last word on the subject of commemorating of the orphanage. After a short time, we managed to name one of Krakow's streets after Dawid Kurzmann. You can read more about it in this article. 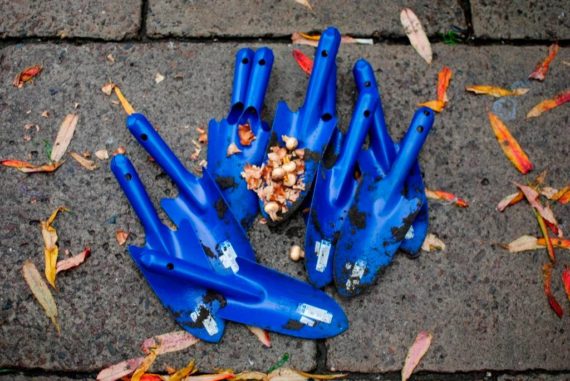 Planting crocuses at the site of the orphanage.