We use Cookies.
Walkative!BLOGcuriosities
Kraków and Easter – the many local customs and rituals you should know.
#Easter in Kraków #Polish Easter #Polish traditions
Share:

Kraków has some really peculiar ways of celebrating Easter holidays. The local traditions go centuries back. Most of them predate Easter itself and are deeply rooted in the pagan Slavic times. Let’s delve together into the topic of sometimes mysterious, sometimes creepy and scary and sometimes quite funny Easter traditions of Kraków and its vicinity. 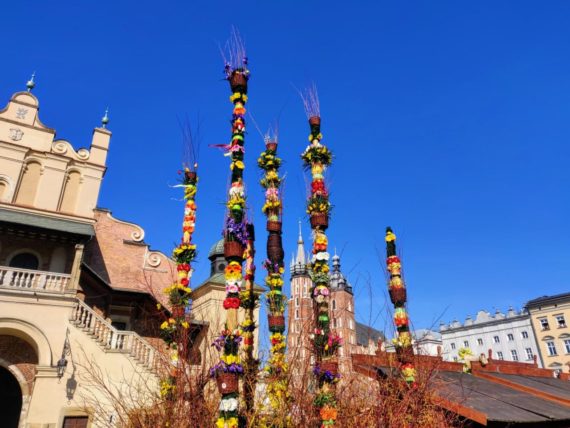 Easter in Kraków, palms on the Main Market Square.

Brotherhood of Good Death - a terrifying procession in the Franciscan Church

Let us start with the most serious of those, a tradition related to Good Friday. It is a very important but undoubtedly the saddest day associated with Easter. The day when the bells at the altars are silenced is, in the Catholic tradition, a time of reminding about the death of Jesus on the cross and, at the same time, of repentance and reflection about death in general.

On this day it is worth coming to the Franciscan Church. For those who believe for religious reasons, and for everyone else to see one of the most interesting Krakow traditions with a centuries-old origin - the procession of the Archconfraternity of the Passion. The main headquarters of the Archconfraternity is the Chapel of the Passion in Krakow's Franciscan Church.

Black outfits, hoods and skulls are to remind people of the shortness of life, just like the sentence they repeat many times during the liturgy: MEMENTO HOMINEM MORI - remember human about death.

Despite their menacing attire, members of the Archconfraternity of Good Death over the ceturies turned out to be benefactors for many. They gave alms, visited prisoners, and had the right to redeem those imprisoned for their debts. A special gift, of course given on Good Friday, was the "gift of life" - the Archconfraternity had the right to free one villain sentenced to death. Members of the Brotherhood, in the ritual costumes, would go down to the basement of the Town Hall to open the gates of the death cell. The one who was released from guilt and punishment joined the Brotherhood and remained under its care until the end of his days. The townspeople and nobility also joined it, and the hoods ensured their anonymity. The privileges of the Brotherhood were limited by the Austrians and then by the communist authorities. Today, their public activity is limited to Lent and participation in the liturgy. It is not the only one religious brotherhood in Krakow, but undoubtedly the most famous and... the most picturesque. 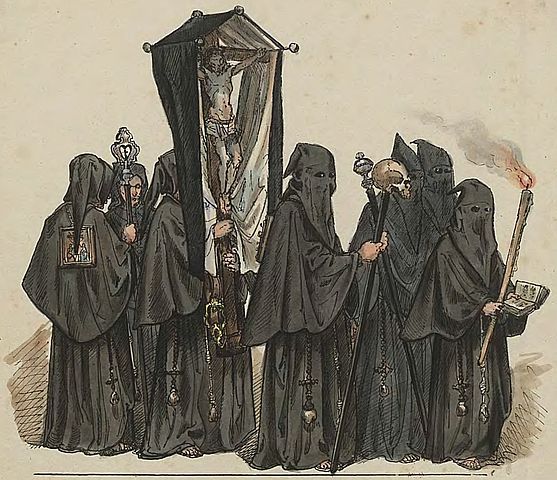 The procession of the Brotherhood of the Passion, Kraków Easter tradition. Illustration by Jan Matejko.

Emaus - most famous fair in Kraków

As you probably know from our article about the general Polish Easter traditions (if you haven’t read it here it is) Easter Sunday in Poland is most of all EATING. Lots of eating! On one hand after a long period of Lent it is quite understandable but after a day like that going for a walk is a pure necessity. And this is how one of the most known traditions of Kraków’s Easter is celebrated.

Emaus is a fair that has been organised in Kraków for centuries in a picturesque area of Zwierzyniec where a medieval convent of Norbertine nuns exists. Historians date it back to the 12 century. The name comes from a biblical village where disciples of Christ were heading on the day of his resurrection. The fair, held on the street also called Emaus, became very popular in the 19th century and was treated as a big, ceremonial walk for Kraków’s society (in the vicinity of the convent there are amazing walking areas like Las Wolski and Kościuszko Mound). It was a way to show off with new clothes and hairstyle, socialize with friends and gossip about foes. With time it transformed into a fair-like, folk amusement. 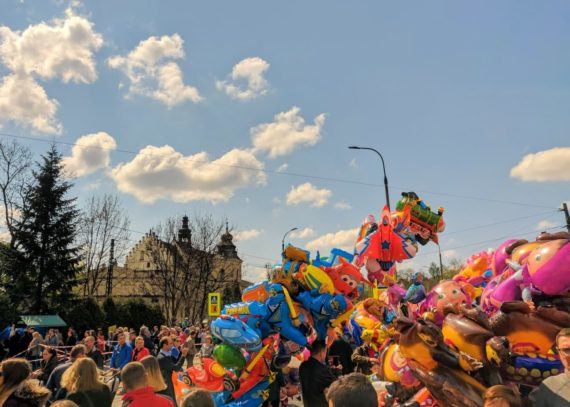 It is organised on Easter Monday till the present day and is accompanied with fair selling today mostly folk toys, sweets, honey and jewellery. There are certain things that are unique when it comes to this particular fair and have always been connected with it. First one is the “tree of life”. It is a proof that the event might have a Slavic pagan tradition that goes far beyond Christian Easter. In Slavic times trees were objects of worship. It was believed that spring was a time when souls of the dead come back to the surface of the earth and sit on branches of trees, taking the form of birds. The “tree of life” became a souvenir from the Emaus fair representing the time of spring, the power of life, joy and hope for the future. Today there is even a contest held for the most beautiful tree.

Another item sold during Emaus is quite problematic and controversial - it is a figurine of a Jew in traditional clothing that is believed to bring luck to its buyer. More about this tradition you can read here: http://www.luckyjews.com/ The website is related to an exhibition and a book prepared by the Ethnographic Museum in Kraków on this complicated subject.

The other popular thing people usually get on Emaus are traditional, small pretzels strung on the thread and forming a chaplet. You can even see kids running around with such necklaces on their necks. 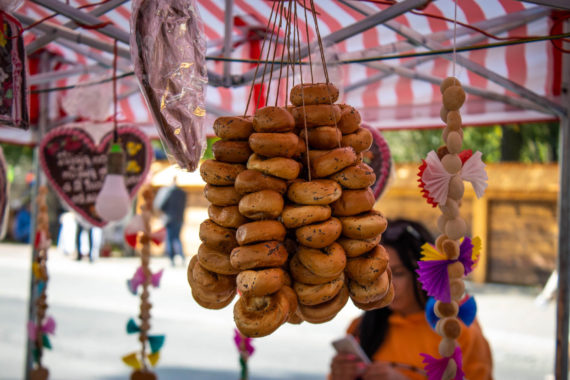 Pretzels sold during the Easter fair in Kraków.

Easter Monday is also a day when a figure of Siuda Baba combs the area in search of young girls to smear them with soot. Sounds odd? Let’s explain what this is all about. 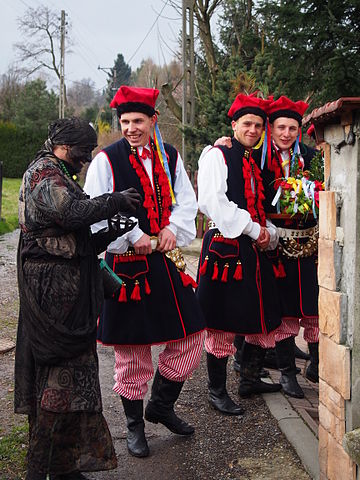 Once there was a pagan temple in the village of Lednica Górna. It was located next to a spring in a sacred grove. The priestess who guarded the holy fire there couldn’t leave her post to bathe for the entire year! Her face was then all covered with soot. When the year passed she would go hunt for her successor. All the young girls in the vicinity would then go into hiding. So much the legend, today you can meet Siuda Baba in Kraków and its vicinity, especially in the town of Wieliczka (where the famous Salt Mine is located, in this article you will find how to get there) and Lednica Górna. Siuda Baba is a man dressed shabbily as a woman and his face is covered in soot. There is usually a necklace made of chestnuts or potatoes hanging on his neck. He/she is accompanied by several other characters - a Gypsy and Krakowiacy (men dressed in Kraków folk costumes). They go around, collect donations and smear people’s faces (mostly girls) with soot. 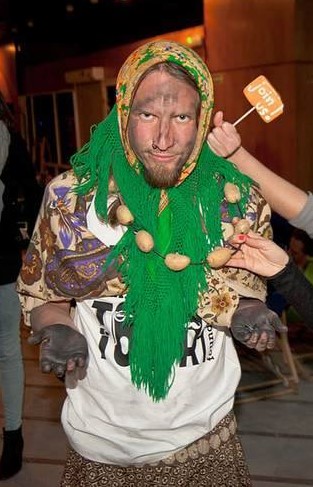 Rękawka - medieval enclave in the middle of Kraków

The next day, Tuesday right after Easter, is the famous Rękawka day in Kraków.

Again, to explain its origins we have to get back to the ancient Slavic times. There were two moments when our Slavic ancestors organized Dziady - the events that were to establish a bond with the living and the dead. The Slavs believed that souls of the dead were the caretakers of the sphere of fertility and there was a need for having a friendly relationship with your dead predecessors. It was possible to do it through rituals held two times a year: in spring and in autumn. As the souls were coming back from the worlds beyond, people believed they needed to host them properly to win their favour. Feasts were then organized with elaborate food and drinks. Lights were also lit so the souls would know their way back from beyond to the loved ones, still living.

Rękawka is related to this ancient tradition and it is held on what is believed to be the burial site of the legendary ruler who established our city, the mythical dragon slayer, king Krak. According to a legend people would bring the soil to heap up the mound that was to commemorate him in their sleeves. And sleeve in Polish is “rękaw”, hence the name of the event and of the mound itself was once Rękawka. 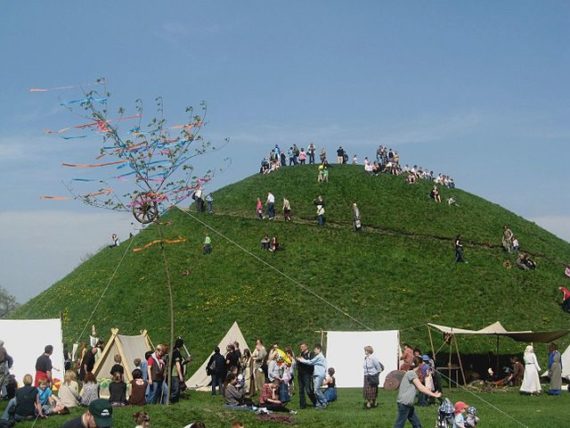 In the olden days during the festival of Dziady wealthy people would throw eggs (the symbol of new life), bread, apples, gingerbread and money from the top of the mound right into the hands of the eager crowd waiting at the foot of it. The old slavic tradition continued and with time was glued with the Christian one. It survived till the present day in the form of a fair and a fete. Today of course no one throws food from the mound but you can watch performances organized by groups who recreate costumes, customs, fights and clothing related to medieval knights. If you feel like it, you can also participate in the contests of archery or javelin throwing.

If medieval times turn you on - it is your place in Kraków! 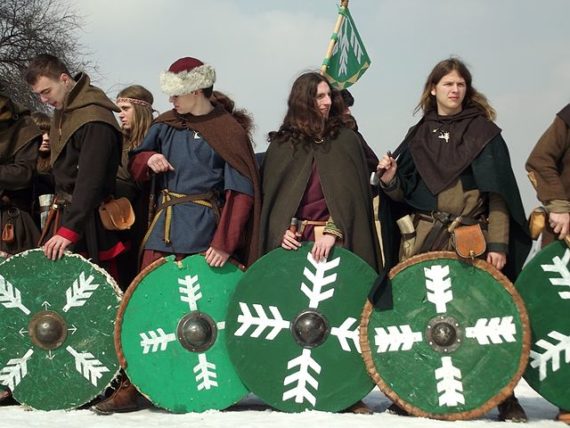 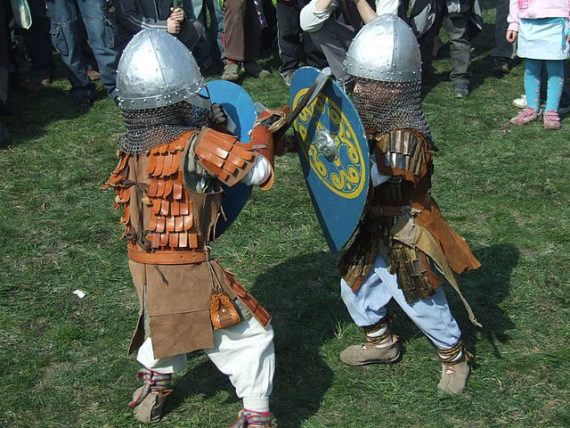 The term pucheroki comes from the Polish-Latin composite wording “na pueri” meaning “for boys” and referring to the old tradition of poor students (then of course only boys) collecting money around Krakow’s churches in exchange for a silly-ish song or two. The tradition was cut short in 1780 by the local bishopry. Yet it has not been lost.

By the end of the 19th century it was re-discovered by young boys from the villages around Kraków, namely Bibice, Tomaszowice, Trojanowice, Modlnica and Zielonki and has continued until this day. On Easter Sunday groups of boys roam around the said villages, dressed in leather and sheepskin inside out and long, pointy hats made of hay, cardboard and colourful tissue-paper. They often have their faces smeared with soot and carry baskets. They sing Easter songs hinting at their uneasy university life as “zocek” (a folk way of pronouncing “żaczek”, an old-fashioned way of calling a student). Whoever accepts them ought to give them some goods, usually eggs and other food. This tradition also corresponds with the winter time’s kolędowanie, or koledari, carol singing walk when groups of youth, dressed properly, go around the village, sing carols, collect gifts and… cash. Thus, uniquely, the old students’ tradition turned into a folk one.

There is one more, last thing worth mentioning here. In Tyniec, a village (or, to be exact, former village, as the place has been officially part of Kraków since 1973) some 10 kilometres south-east of Kraków’s Main Square, where the oldest medieval abbey in Poland exists (we write about it here) there is a hill called Wzgórze Wielkanoc - the Easter Hill. Why? Believe it or not but when you go to Tyniec and stand right in the centre of the village at the main crossing (between the Benedyktyńska, Bogucianka and Bolesława Śmiałego streets) on Easter Sunday you shall see the Sun Rising exactly above the Easter Hill. Unfortunately today, unlike before, the hill is covered with quite random greenery, so you can’t see this feature properly anymore, but the actual hill and surrounding wilderness are great, reclusive spots for a small hike and picnic atop the hill. As the place is not very well known, you are unlikely to meet any visitors there which adds to the atmosphere.

So if you are an early bird here is just another thing you might consider doing in Kraków during Easter. Right after putting on the necklace made of pretzels, throwing some eggs from a hill and having your face smeared with soot! Enjoy!