We use Cookies.
Walkative!BLOGlocal cuisine
Polish vodka – a manual on how and what to drink in Poland
#Polish alcohol #Polish vodka
Share:

Welcome to our little guide on Polish vodka and what to do about it. If you’d like to know more about Polish national drink from the historical point of view, click here.

The most popular industrial brands that you will find in practically every shop and bar are Absolwent, Soplica, Bols, Wyborowa, Żytnia (wheat) and Luksusowa (potato). If you happen to be invited to a Polish wedding, the chances are high that one of those will be served (by the way, check here our little article about how to survive a Polish wedding). You can, of course, drink them straight from a shot glass, but nowadays they are usually mixed with juices (orange and apple, usually) or soft drinks. That’s not the way we suggest, though, as it is a rather new fashion in Polish culture – it became popular with the fall of communism and spread in the 90s when Poland wanted to westernize fast; the best proof is the word we use for cocktail. It is… „drink”! Be careful, then, asking a Polish waiter in English for a drink, as you may end up receiving more than you bargained for 😉

What we suggest is going old-school and drink a shot of vodka with a „zagryzka” - literally, afterbite. There are four by far most important zagryzkas (more on this subject can be found in our article on Polish traditional food):

- marinated herring in oil or cream, 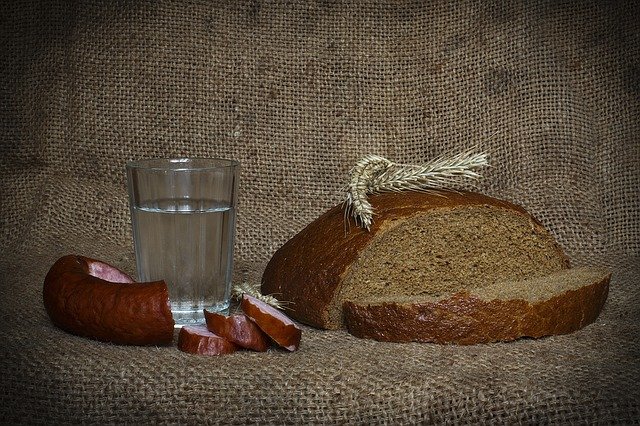 In the communist times, there were special, simple bars serving basic food, among them above mentioned zagryzkas, and vodka; for around 15 years now there is fashion to recreate them and they have become part of the party landscape of bigger cities by now. The most popular chain is „Pijalnia Wódki i Piwa”, but there are many other particular ones where you can enjoy drinking the way our forefathers used to. If you’d like to know more and prefer company, book our tour here. 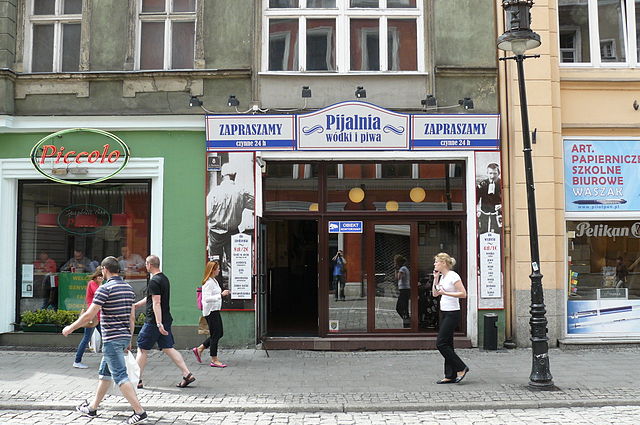 There are several particular brands you may want to look out for, which are not that common either due to their price or historical turbulences.

- Chopin Black is one of the most luxurious Polish potato vodkas (among the most awarded potato vodkas in the world!), so expect to pay a high price for it. For connoisseurs or as a high-end gift.

- Młody Ziemniak (Young Potato) takes the above exclusivity a step further; it’s made from young, spring potatoes and is only distilled once (the norm being three-four times), every year being different, as attested by the hand-written etiquettes with information on the place and time of harvest, the given year’s weather conditions and signature of the person responsible. So it is not only a great high-end gift, but an actual investment, as the price of a bottle goes up every year it matures!

- J.A. Baczewski is one of the first brands of Polish vodka, founded in Lwów (today Lviv in Ukraine) in 1782. Until WW2 an extremely successful company (for example, the first to use modern marketing with the use of advertisement and fancy bottles), was destroyed by both Nazi Germany (the factory buildings were bombed) and Soviet Union (the last two owners were executed). Fortunately, a branch of the family survived and settled in Vienna, where they revived production thanks to miraculously recuperated recipes. The production is still in Vienna, but it is available in Poland again and slowly regaining its long-lost place among Polish vodkas.

Before getting into details, we need to introduce another term here – nalewka. Think of it as liquer, flavoured beverage obtained either by infusion (the desired product dipped in alcohol) or maceration (product sliced or crushed and then submerged in alcohol; the Polish term derives from this method, as the word „nalewka” comes from „nalewać” - to pour). Originally herbs were the most popular ingredients and was considered medicine, but soon fruit and nuts were being used and nalewka became what it is till today, a beverage. Modern industrial nalewkas and flavoured vodkas are seldom that, though, usually having essences infused to pure distilled vodka.

1. If you haven’t heard of Żubrówka, then – with all due respect – you’ve been living under a rock. The third most popular vodka brand in the world in 2019 is considered one of THE souvenirs to take back home from Poland (more on this topic you will find here). It is famous for having a blade of grass inside every bottle, which is a little giveaway to its secret. It is actually a herb which grows in the Białowieża Forest on the Polish-Belarussian border and is responsible for its flavour and yellowish colour. We recommend simply sipping it – it is smooth enough – but a popular way to drink it nowadays is a cocktail (often called Tatanka) which mixes Żubrówka with apple juice, sometimes with a slice of lemon and a bit of cinnamon on top. Tastes like an apple pie!! 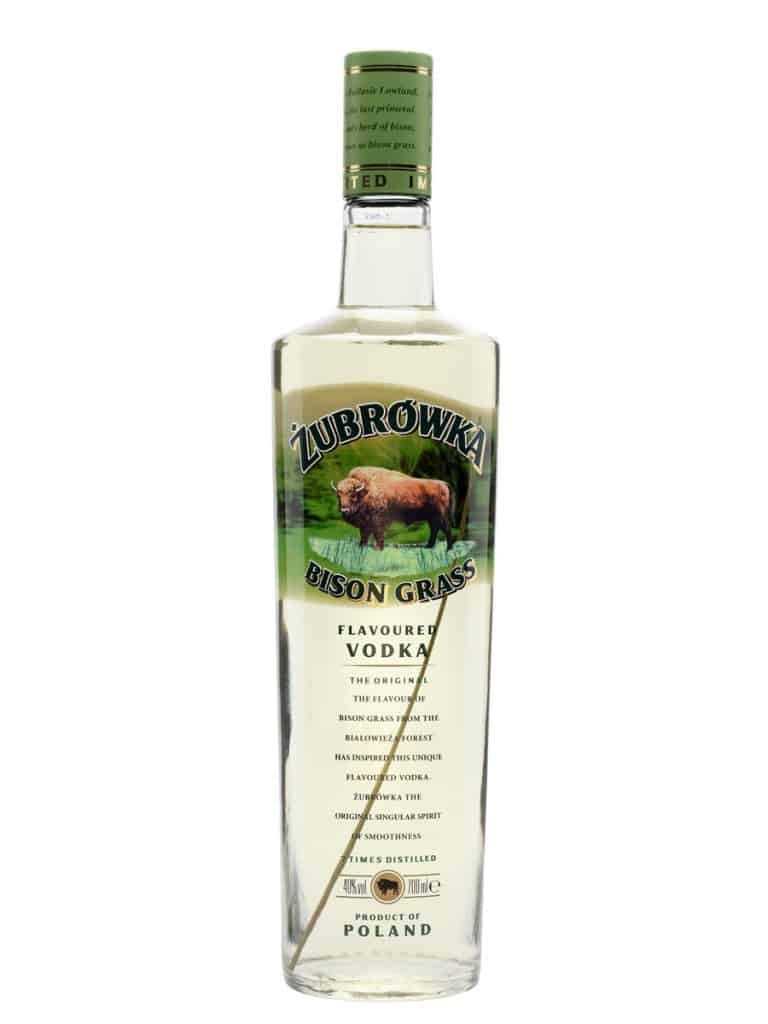 2. Another old Polish recipe is Krupnik, a tincture based on honey and up to 50 different herbs!! The one most commonly found around the country has „only” 27, still the taste is very smooth, so sip it slow and do not mix with anything else, it is in and out of itself a mix supreme. 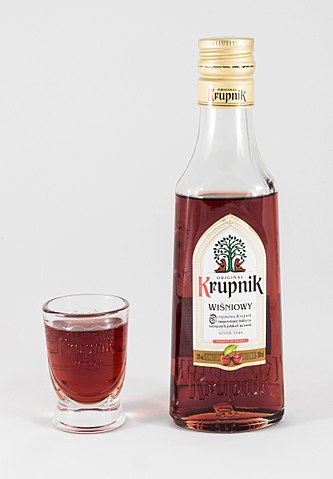 3. Similar to it is Żołądkowa Gorzka, but fewer herbs are used and the sweetness is acquired through a mix of nutmeg, cloves and cinnamon. The author recommends pouring it over small pieces of fresh cucumber and leaving for a while, then adding Sprite/7UP-type of soft drink. Tastes like fresh salad, great for summer breakfast! 😉

If such blends are too much, then you can find maaany of the herbs separately infused. Way too many to enumerate here, so let’s just mention Piołunówka (a cousin to absinth!). 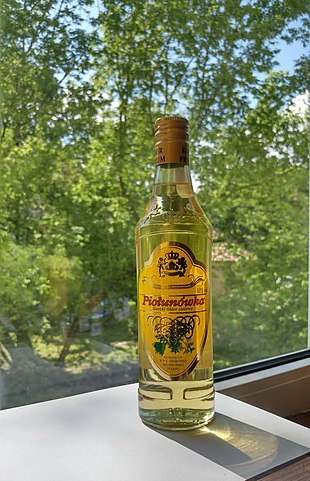 4. Many fruit versions are also available, but among them plum comes to the spotlight; in many Slavic countries you will find Śliwowica. Its particularity comes from the fact that it should be produced solely on the base of fermentation of the plum itself. It is also famous for its alcohol content which is around 60-70%. In case of Poland, two versions are worth mentioning:

- Śliwowica Łącka, coming from a small region in Southern Poland, where the recipe is past down generations from the XVII century,

Other popular flavours are wiśniówka (sour cherry – it actually tastes a bit like cough syrup, so it must be good for you!), pigwówka (quince), czarny bez (elderflower) and cytrynówka (lemon).

5. Many of the aforementioned nalewkas and vodkas have been historically and are again homemade, but for the most of the modern period that was illegal, as hard liquor production was the monopoly of the state (till the very day, some alcohol shops in Poland are called „monopolowe”). That, of course, didn’t stop anybody and moonshine (called in Poland „bimber”) was widely popular, sometimes of very bad quality. An honorable mention here is przepalanka – vodka based off of burned, caramelised sugar.

The proper words to use when drinking Polish vodka

Last, but not least – what shall you say when you toast? „Na zdrowie!” (pronounced „na zdrovyeh”) is the expression, found in many other cultures, as it is simply „to health”. Very useful when traveling around Slavic countries, as many have a similar cheers and even if not, it will be understood and you will be considered brethren in split second.

What more can we say? Visit your local store or bar, or better yet – come to Poland; choose one of the vodka types from our little guide, raise a toast, say „na zdrowie” and book a tour with us! 😉

Related stories:
history & more
Poland and vodka - history of a love/hate relationship
Read more
local cuisine
Mead and Poland - a bit of history and a few tips on which Polish meads to try!
Read more