When summer arrives, many of us would rather not spend the entire day in the museums, closed in four walls. Instead, we'd love to get some fresh air and relax far from the crowds and the hustle and bustle of the city. In Warsaw, there's certainly a lot to choose from! The capital of Poland is one of the greenest cities in Europe, with around 40% of its area being covered with forests, parks, and green squares! So, take a look at our article to choose the green area that is closest or that seems the most interesting for you.

This huge (76 hectares!) park used to be King Stanisław August Poniatowski's summer residence where he was going anytime he wanted to spend some time far away from his main residence. And back then, traveling to Łazienki was quite a journey! Right now, you just need 10 minutes to get there from the Old Town. Just jump on a bus to enjoy silence, admire beautiful classicist architecture and get the opportunity to feed the squirrels! 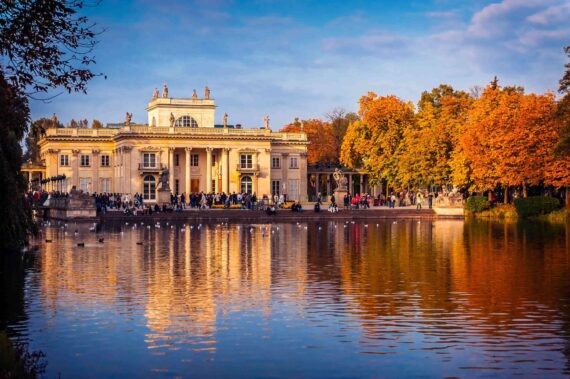 Once there, don't forget to visit the Palace on the Isle, a beautiful royal residence, one of the few original European 18th century court theatres, and the Old Orangery, which now is the Royal Sculpture Gallery.

On the right side of the river, in the district of Praga, you can find a park that in 2009 was officially named "The Most Beautiful Park in Poland" and the 3rd most beautiful park in Europe.

Skaryszewski Park is not only a stunning green area, it's also a zone placed on the national heritage list. It's a unique example of a city park where we can find over 280 different kinds of plants and trees! The oldest ones are over 100 years old.

Can you imagine that historically people were not allowed to enter the parks? It all changed with the Saxon Garden that in 1727 became the first park in Poland open to the public. However, there was one requirement that people had to fulfill before entering - they had to be dressed properly. It's not very surprising - the park has always been an elegant place. This is where the King August III Sas founded the first building of the theatre, the so-called Opernhaus. 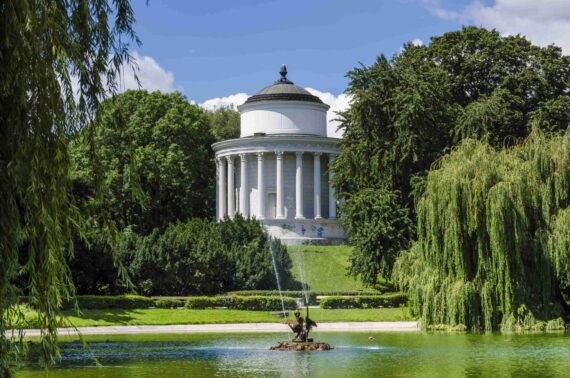 Once in the Saxon Garden, look for some of its characteristic spots: a fountain designed by one of the greatest architects from Warsaw, Henryk Marconi, sundial that still shows the correct hour, 21 statues presenting seasons and virtues, as well as a bench of Frederic Chopin.

The Krasiński Garden dates back to the 17th century and until the Saxon Garden was created, it used to be the largest garden in Warsaw. Originally, it served only its owners, but after a hundred years, in 1766, it was opened to residents and quickly became one of the favorite walking places of Warsaw residents. This is also the case today. The garden was created near the Krasiński Palace, which is considered to be one of the most beautiful palaces in Poland. Currently, the garden covers an area of ​​9.5 hectares.

In recent years, the historic fence of the garden has been restored, and stylish elements of small architecture like benches, lanterns and litter bins have been recreated. Natural water features were also taken care of - a pond, a stream and a cascade. There are two boules’ courts and an outdoor gym in the park, while children can use a modern playground with an area of ​​over 2,000 square meters!

Let’s remember that in the Krasiński Garden it's prohibited to enter with dogs, so if you are in Warsaw with your pet, you should choose a different place to relax together.

The unusual name of this Warsaw park comes from the 18th century, when rabbits ("króliki") were kept here. Originally, there was a brewery, brickyard, inn, mill and barn in the area of Królikarnia. Today, however, we’ll find there a beautiful palace with the Sculpture Museum, opened on January 26, 1965. It hosts temporary exhibitions presenting the works of Polish and foreign contemporary artists.

The nearby park contains not only numerous trees and bushes, but also the Sculpture Park, which presents selected works from the rich collection of the National Museum in Warsaw. It may not be the largest park in Warsaw, but it certainly deserves attention.

Before this beautiful place became a park beloved by Warsaw residents, in the 19th century it used to be a military training ground, then a military, sports and passenger airport, and a venue for sports events. Initially, the area of ​​Pola Mokotowskie was 200 hectares, today it has shrunk to 70. But it’s definitely enough to relax and have some fun!

A bicycle route runs through the park, so it’s full of cyclists, skaters and runners. You can also sit on the grass and relax in the sun. There are several restaurants in the park, and in the summer season – a number of food trucks thanks to which you'll not get hungry!

Kabacki Forest is one of the favorite places of rest and recreation for the inhabitants of the entire capital. It’s located a bit further from the center, but still within the borders of the city, therefore it’s easy and quick to get there by metro.

Both people who prefer active and more passive leisure will find something for themselves in the Kabacki Forest. There are both fitness and bicycle paths, as well as recreational areas, tourist shelters, benches, and playgrounds for children.

While walking along the trails, you can meet foxes, badgers, weasels, pine martens, domestic martens, and hedgehogs. From the trees, you can admire the oaks, pines, aspens, Norway maples, as well as apple and pear trees.

The Warsaw University Library roof garden is one of the largest and most beautiful roof gardens in Europe. The garden consists of two parts: the upper (2,000 m2) and the lower (15,000 m2), with a pond, a fountain and several granite sculptures. From the roof, you can admire the stunning panorama of the city and the view of the Vistula River. Plants in the garden are gathered according to their colors: golden, silver, carmine, and blue. 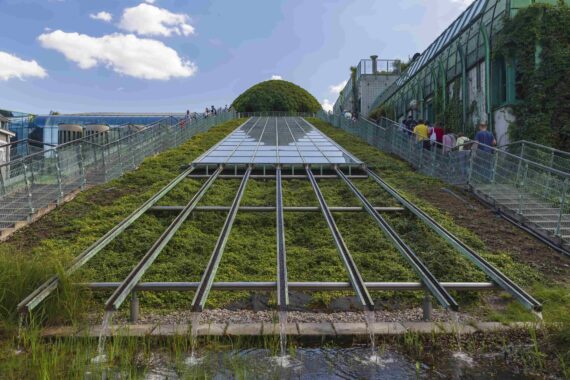 The garden is open from April to October. Before you go for a walk there, be sure to check its opening hours.

This relatively small garden is located in the vicinity of the popular Łazienki Park, and therefore a lot of people miss it. However, it’s a great asylum for people seeking contact with the beauty of nature. Sit on a bench under one of the majestic ancient trees or discover the richness of thousands of plant species from Poland and many exotic countries.

The plants are divided into different parts: plants of various environments, medicinal, ornamental and creepers. You can also feel like in the tropics for a moment in one of the greenhouses with giant cacti, palm trees, fig trees, oranges, vanilla sticks, coffee bushes, avocados and carnivorous plants. The garden is open from May to August.

This park dates back to the 30s of the XX century and initially it was a golf field. Until today, the Culture Park in Powsin is a perfect place for those who love spending time in an active way. What you’ll find there are basketball and volleyball fields, tables to play chess, open swimming pool, concert area, and much more. During the whole year, you can also rent cabins with full sanitary facilities.

So, there you have it! Don’t miss out the opportunity to learn even more about Warsaw and its amazing spots and book your spot on our tours now!