Berlin is a place full of history and culture. It is undoubtedly one of the most unique cities in the world. But what lies at the core of its uniqueness? Most people who have experienced the German capital firsthand are prone to say: its diversity! In fact, everyone associates Berlin with a variety of different things: music and nightclubs, liberalism and anarchy, sex and promiscuity, demonstrations and political activity, drugs and addictions, street-art and slums, history and sights like the Reichstag or the Brandenburg Gate... In this article, though, we will focus on another important aspect of Berlin's culture: museums and exhibitions!

Here we present you 14 museums, art galleries, and exhibitions that, we believe, everyone should visit in Berlin. It will help you not just feel the vibe of the city but also comprehend its rich history and the scope of the Berlin's culture.

Attention! This is not a ranking list, for each of these places is unique and worth visiting. Besides, most of the museums and galleries are very different and not related to each other, so they are incomparable. 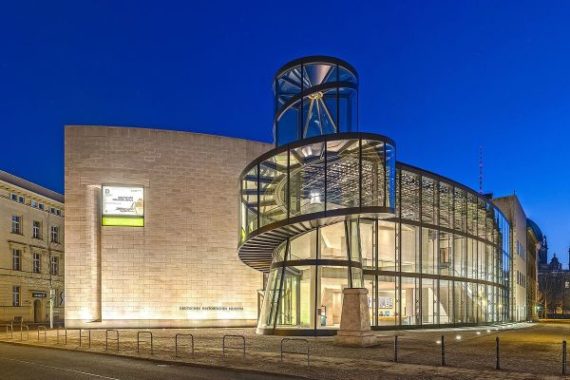 The German Historical Museum might be the most visited museum in Berlin. It is located on the most representative street in Berlin, the Unter den Linden (literally means “under the linden (trees)”) which attracts many visitors with its landmarks and sights.

The museum has one huge permanent exhibition called “German History in Images and Artefacts”, as well as multiple temporary exhibitions on the four floors of one of its halls. Besides, there is a library with a large collection of books and magazines on history. Furthermore, DHM has its own cinema theatre (Zeughauskino) where films about history and some other topics are shown.

By the way, you should not think that a historical museum is just about long, boring, and tedious texts about irrelevant events in the past. History means describing all aspects of life: politics, society, art and culture etc. This museum covers all of these aspects with a wide range of not only texts, but also artifacts like statues, paintings, photos, videos, etc. In short, be ready to encounter and explore everything: from early medieval helmets to GDR vacuum cleaners... 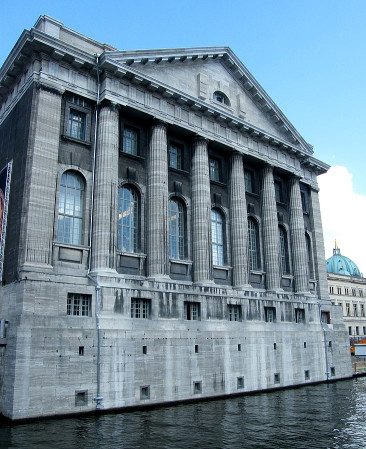 Pergamon is one of the most famous museums in Berlin. It is located in the very heart of the city, on the Museum Island. Pergamon is a huge place where you will find immense reconstructions of ancient architecture, as well as many pieces of Islamic art and different objects from the Middle East (Sumerian, Assyrian, Babylonian cultures).

Among the most valuable items of the museum collection are ancient Greek Pergamon Altar (2nd century BC), Babylonian Ishtar Gate (6th century BC), Roman Market Gate of Miletus (2nd century AD). The size of some works is so impressive that you may find it hard to believe that you are still in the museum, and not in the actual place where these things once stood or were used.

In short, if you like monumental and splendid, old and ancient, the Pergamon Museum in Berlin is your place! 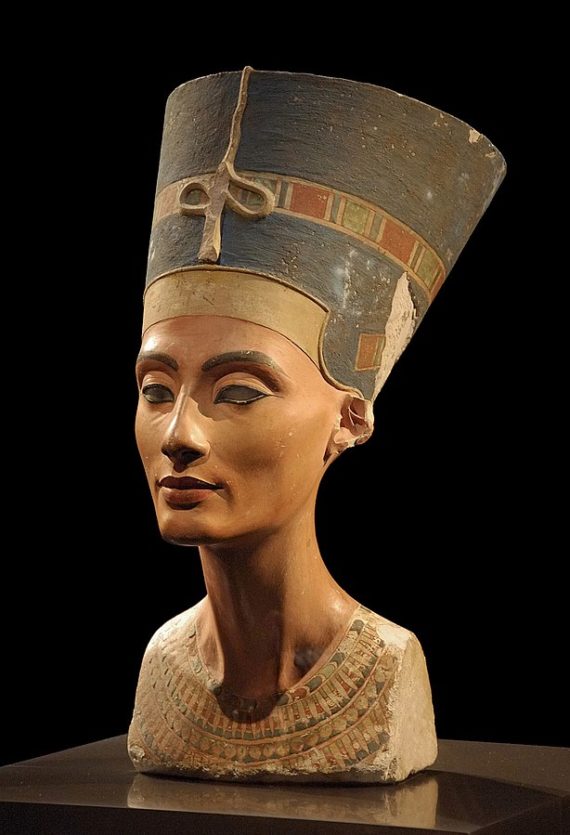 The New Museum of Berlin is a fascinating building in itself. It was rebuilt in the 1980s after having been in ruins for decades after World War II. Now it contains a big collection of items from prehistoric time, as well as from ancient epoch, and some early Middle Ages. Neanderthal skulls, antiquities from Troja, old sarcophaguses, the bust of Egyptian queen Nefertiti (dating back to 14th century BC), hieroglyphics are only a short list of all artworks and artifacts on display.

The history of this building reflects the idea of the collection - to show how people are able to do both: create and destroy. 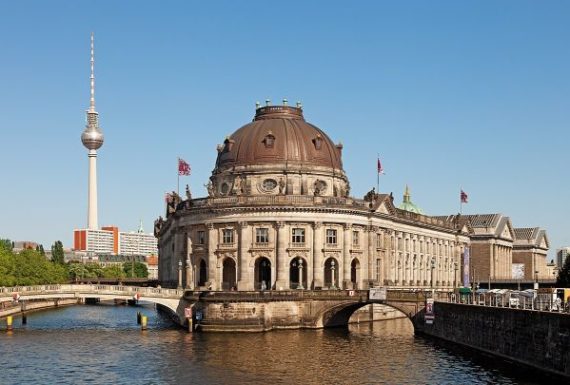 The Bode Museum, named after a famous German art historian and the first curator of the museum Wilhelm Bode, is another beautiful building on the Museum Island. A big collection of sculptures (including some masterpieces of Canova, Tacca, and Donatello) as well as galleries with impressive Byzantine and medieval items (frescoes, mosaics, carvings) is what makes this museum a big recommendation for art-lovers. 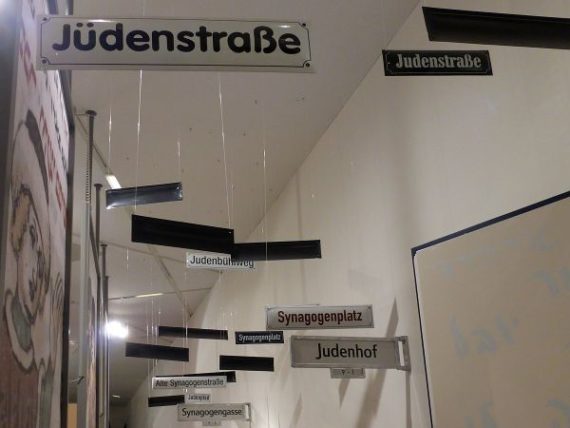 The Jewish Museum of Berlin allows you to dive into thousands of years of Jewish history on the German territory. You may be surprised to learn that before World War II, Berlin was among the cities with the largest Jewish community in the world! About 170,000 Jews (nearly 5% of the city's general population) lived in Berlin in the interwar period. There were over 80 synagogues, numerous Jewish schools, and multiple unofficial “shtiblach" (Hassidic prayer houses). Besides, famous Jews like Albert Einstein and Rosa Luxembourg lived in the German capital. Unfortunately, the Jewish community of Berlin was destroyed when the Nazis came to power. Today, there are officially over 10,000 registered Jews in Berlin. Needless to say, there are many more who are not registered.

This museum is rather unusual - in terms of architecture, design, and style. Briefly, it is a very interactive place full of documents, contemporary artworks, and some visual effects. Many call it an artwork in itself. Besides, the institution organizes workshops and shows. 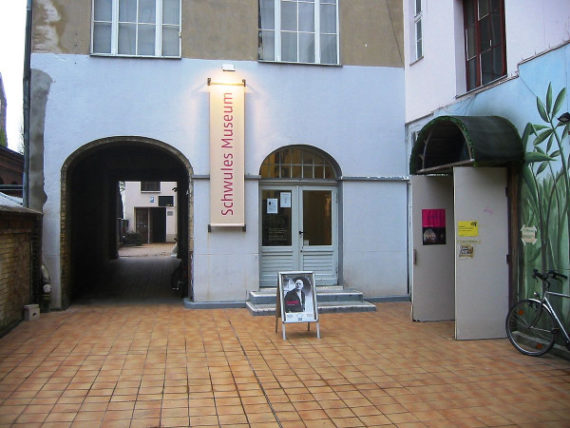 The first gay museum in history of the world was opened in 1985. Where? Of course, in Berlin. This city has long been known as one of the world's capitals of the LGBT community. In fact, the very first gay district in the world appeared in the 1920s in the former town of Schöneberg which later became and still remains part of Berlin.

A significant part of the city's population today belongs to the LGBT community and is very active socially and politically. No wonder that this museum attracts many people.

The Gay Museum in Berlin not only teaches the whole history and culture of queer communities, but also tries to educate people about the difficulties homo-, trans- and bisexual people face because of deeply embedded prejudices and discrimination.

Apart from a huge collection of books and other published materials on homosexuality in its library and archives, the museum displays a wide range of artworks (photographs, films, recordings, clothing) on its permanent exhibition. Besides, every now and then temporary exhibitions are held.

It is hard to find a better museum that promotes tolerance and diversity. 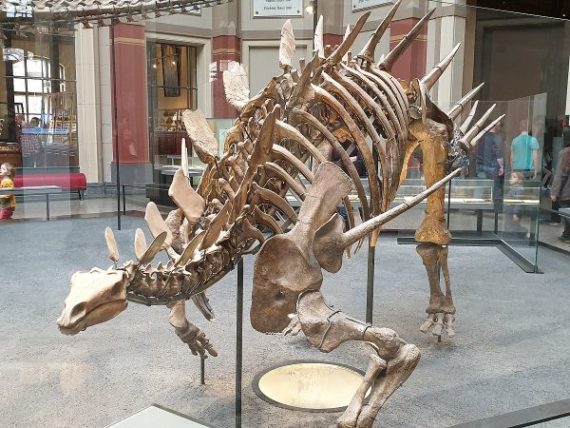 The Natural History Museum in Berlin has over 30.000.000 items! What's more, this massive collection of fossils is constantly replenished with new specimens. You will see dinosaurs and animals, fish and plants, minerals and meteorites, the list is endless... The museum is especially proud of the Giraffatitan skeleton, the largest mounted dinosaur in the world (it's over 13 metres high)! In short, this place is a true paradise for scientists and all people who like palaeontology, zoology, geology, mineralogy, and many other fields ending with "-logy". 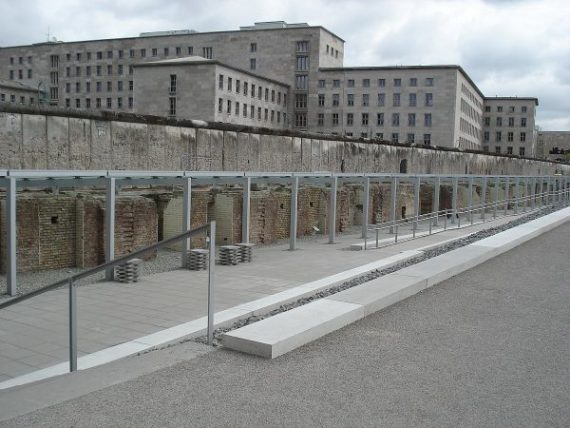 The museum Topography of Terror, just like the name suggests, is a grim and eerie place, but it gives you an in-depth understanding of the subject. The museum documents atrocities perpetrated by the Nazis.

The site itself is symbolic - the SS and Gestapo had their headquarters on this very plot of land. Exhibitions present a lot of media materials (audios, photos, and short films).

It is hard to find a more appropriate place in Berlin where you can experience Germany's Vergangenheitsbewältigung (“coming to terms with the past”). (Read more about one big memorial in the very heart of Berlin) Besides, the Museum of Terror is completely free which may be a big asset for those who’re travelling on a tight budget. 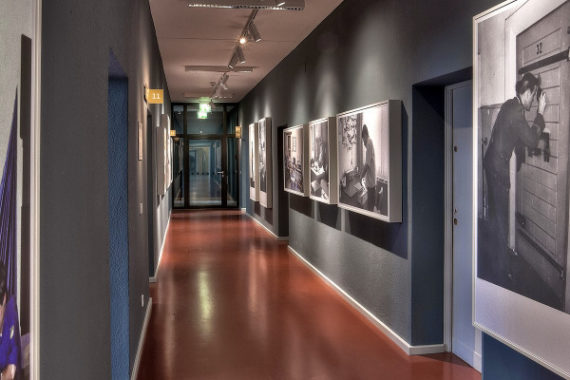 The Stasi Museum sounds like a creepy place that has to do with terror. The word "Stasi" derives from "STAatsSIcherheitsdienst", or "State Security Service" in English. It was the internal security force of the former German Democratic Republic (GDR). Roughly speaking, this institution was a German counterpart of the Soviet KGB, known for its brutality and ruthlessness. And even though the Stasi never reached the scale of Soviet reign of terror, their actions were still very harsh and brutal, with some methods being exceptionally shocking.

Today, the former headquarters of the Stasi serve as a museum that is officially called the Research Centre and Memorial at Normannenstraße ("Forschungs- und Gedenkstätte Normannenstraße" in German). The subject and content of this museum is broader than the name suggests. At the exhibition, you will learn not only about how the Stasi monitored, controlled, and manipulated people in East Berlin, but about the whole political system of GDR. Attention! There is really a lot of material and information in this museum. So do not expect to quickly run through all that. Therefore, it is a perfect place for those who wish to get an insight into life under communism in East Germany. 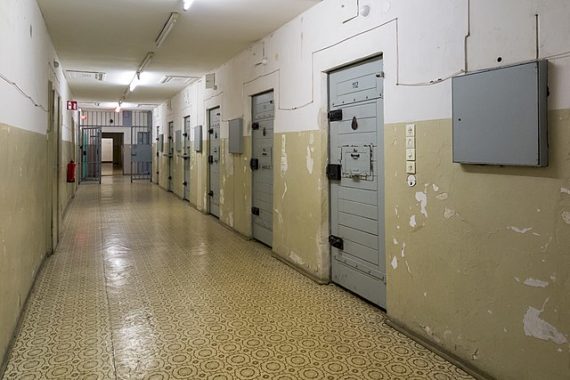 You may also be interested in visiting the Hohenschönhausen Memorial which is a former Stasi prison (1946 - 1990). People who attempted to escape from East Germany were mostly put and interrogated here. This place is much more visual and authentic. With nearly half a million visitors per year, the museum presents the history of communist victims. 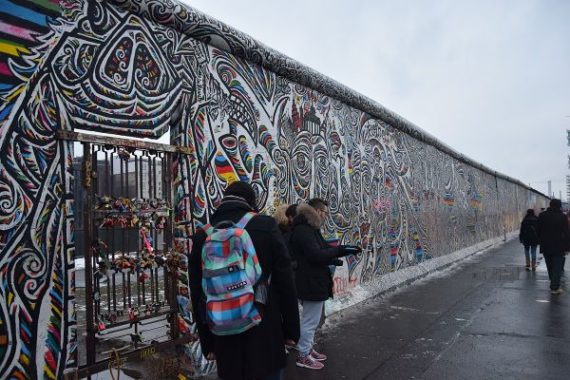 The East Side Gallery is not just the longest art gallery in the world, it is pure history in itself! Just a few metres away from the magnificent Spree River, you can walk along the largest remaining part of the infamous Berlin Wall. Over 1.3 kilometres (4,300 ft) long open-air gallery full of wall murals and messages to the world. The so-called "socialist fraternal kiss" of Soviet leader Leonid Brezhnev and East German leader Erich Honecker is one of the most recognizable graffiti paintings on the wall.

The gallery is open 24 hours a day all year round and, what's also important, is completely free! 😉 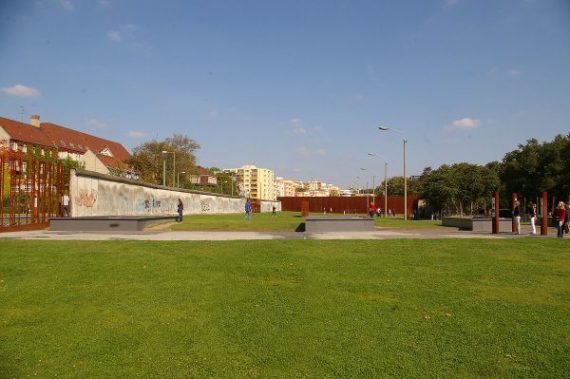 The Berlin Wall Memorial at Bernauer Straße is another open-air place of education in the city. It tells you everything you need to know about the history of the Berlin Wall and some of the victims of the communist GDR regime. The memorial complex includes a remaining 60-metre (200 ft) long part of the Berlin Wall, a Chapel of Reconciliation (Kapelle der Versöhnung), and a Documentation Centre. There is also a visitor centre. Do not miss the so-called window of remembrance in the wall.

Besides, a nice Mauerpark (literally "Wall Park"), which used to be part of the Wall and its Death Strip, is located within a short walking distance. 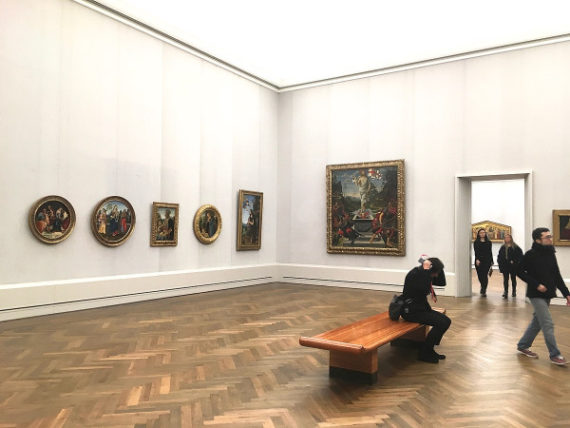 The Painting Gallery of Berlin, or simply the Gemäldegalerie, is probably the most famous art museum in the city. The building is located in the Kulturforum which is an ensemble of cultural buildings next to a famous hub square of the city Potsdamer Platz.

The museum’s marvellous art collection of paintings from the 13th to 18th century presents an insight into the world of masterpieces. The list of renowned artists, whose artworks are on display, is endless: German art celebrities like Lucas Cranach and Albrecht Dürer, Dutch superstars like Rembrandt and Johannes Vermeer, Italian geniuses Raphael, Caravaggio, Sandro Botticelli and Antonio Viviani, and many others from different countries… 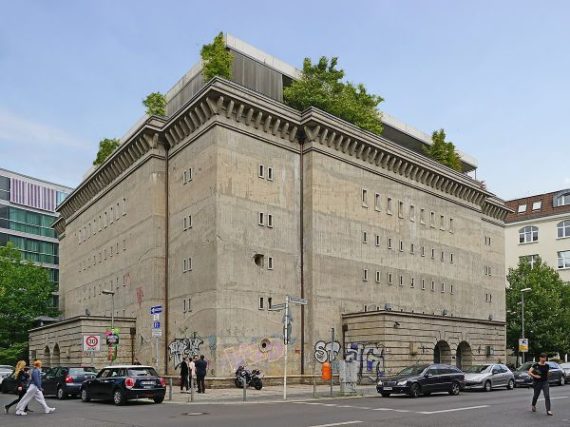 The Boros Collection is an intriguing place in many respects. First of all, it is a private collection of contemporary art, where you can enjoy numerous paintings, photographs, and sculptures. The place was founded at the beginning of the 21th century by a famous German art collector Christian Boros. The museum contains multiple exhibitions that are located in separate rooms on different floors. Many of these rooms are interconnected.

But what makes this place really special is its history. For during the 20th century, it was a World War II bunker... then a prison... and a storage facility... and afterwards a techno club. What other place can help you better understand the history of Berlin? 🙂