Poland was the 18th most visited country in the world in 2019, coming just ahead of the Netherlands with over 21 million tourists. Who would think? What brings the visitors here? Everybody has heard of Auschwitz and the tragic history of World War 2, but the cultural heritage of Poland extends well beyond that which manifests itself in 16 entries on the UNESCO World Heritage List. What are they and how special they are in comparison to the rest of the world? Let’s dive in!

Well, this one is a bit different. Not a city, yet it will take you back to the city of Jerusalem, only 2000 years ago. A fascinating 400 years old baroque complex built on the romantic hills 40 minutes away from Kraków this creation represents the geographical locations of Jesus’ Biblical story. You don’t need to be religious to appreciate the beauty of this strange piece of art - and I should know, being sceptic myself. Two romantic old bridges, several baroque churches lost on the hills and within the forests, a bit spooky chapels connected by several pretty green alleys - it is quite enormous.

Following the pathways actually feels more like a scavenger hunt rather than a religious experience. And on top of that part of this UNESCO site are the ruins of the medieval castle in Lanckorona built by the famous Kazimierz Wielki (or Casimir the Great), about whom you might have heard on our tours throughout the country, especially in Kraków’s Old Town and Jewish Quarter. Lanckorona itself is a very pretty wooden town-village, famed for the artsy and bohemian atmosphere of its market square adorned with a set of wooden folk houses. The views over the Carpathians, including the Tatras, are priceless, as are the local delicacies in one of the few cafes around: pierogi, apple pie or pancakes. Needless to say, the place is also one of the most favourite destinations for road cyclists.

All this just a short one day trip from Kraków. 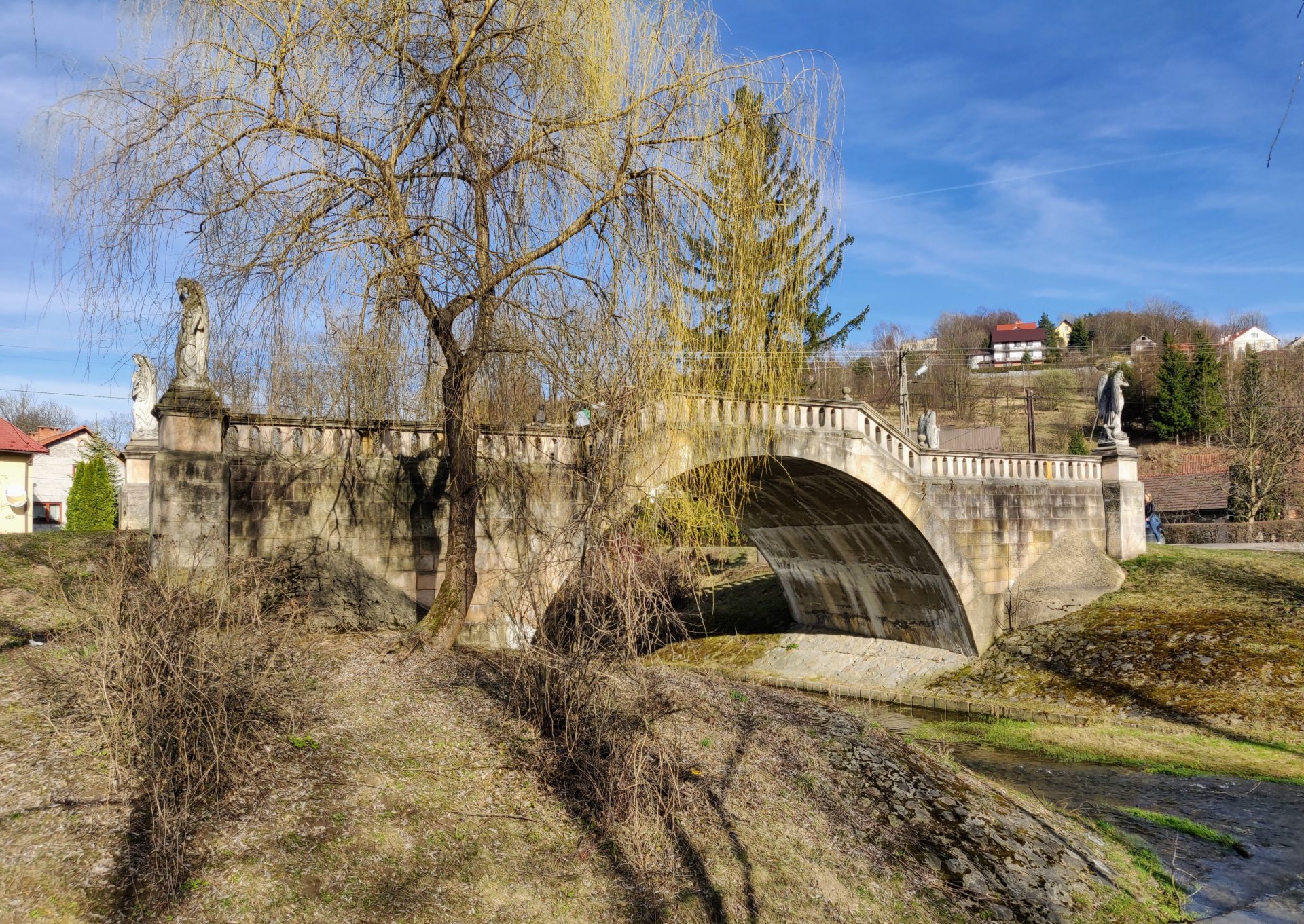 Central Europe’s troubled history manifests itself in a very prominent way in Dolny Śląsk, or Lower Silesia, a region torn between Czech, Polish and German influences over the past 1000 years. In the 16th and 17th century this place was a stage for great religious changes, namely the rise of protestantism and one of the biggest and most bloody wars in European history - the Thirty Years’ War which involved most of central European powers and some smaller states as well. The result of the war was a treaty which allowed Protestants in Silesia to build 3 wooden churches in a predominantly Catholic region. So the Churches of Peace (Kościoły Pokoju, Friedenskirche) in Jawor (Jauer), Świdnica (Schweidnitz) and Głogów (Glogau) were built. Enormous in size for a wooden church, intricately decorated and built without the usage of metal elements two of them survive to this day. Indeed they are the largest religious buildings made of wood in Europe! For a wooden architecture to survive this long is very rare (see our article on the wooden churches in the Carpathians below) therefore they are very well protected with the newest technology.

Apart from being a unique example of art they tell a bigger story of division, war and resulting peace between close neighbours and as such they are a token of friendship and reminder for the future.

You can reach them easily with a short ride from Wrocław either on your own (best to use a car) or with one of the organised tours. 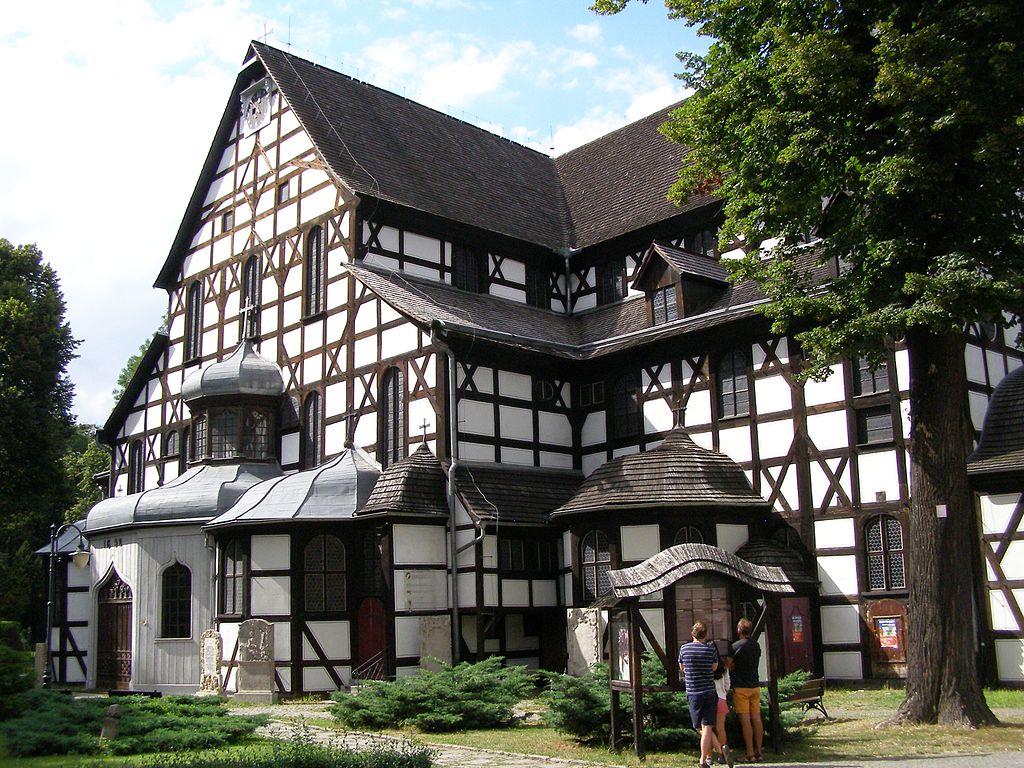 The wooden churches of Małopolska region can be found a relatively short ride from Kraków. You will find them in the Małopolskie (Lesser Poland) and Podkarpackie (Subcarpathian) voivodeships, or regions. Representing a collection unparalleled with the rest of Europe the 6 oldest examples entered the UNESCO list in 2003. Located in pristine parts of the Carpathian Mountains this collection of late gothic wooden buildings is a testament to the importance of Catholic rite in the local folk tradition.

The most famous examples include the church of Dębno Podhalańskie, located not far away from Zakopane and the Tatras, famed by its well preserved 500 years’ old wall paintings and Haczów, the biggest medieval wooden church in the world, dating back to 1388. A church of Lipnica Murowana might be the best preserved of the bunch plus it is situated amidst the well preserved, atmospheric cemetery of old.

The churches and tserkvas (look up number 12 on our list) are best reached and visited on a bike which allows for an uninterrupted ride along the Carpathians and enjoy its nature and culture. Especially picturesque is the trail of Dunajec river with its famous, imposing gorge. Beginning in Zakopane and following the river it reaches multiple places of interest over some 200 kilometres of a gentle, well-prepared cycling route known as Velo Dunajec. 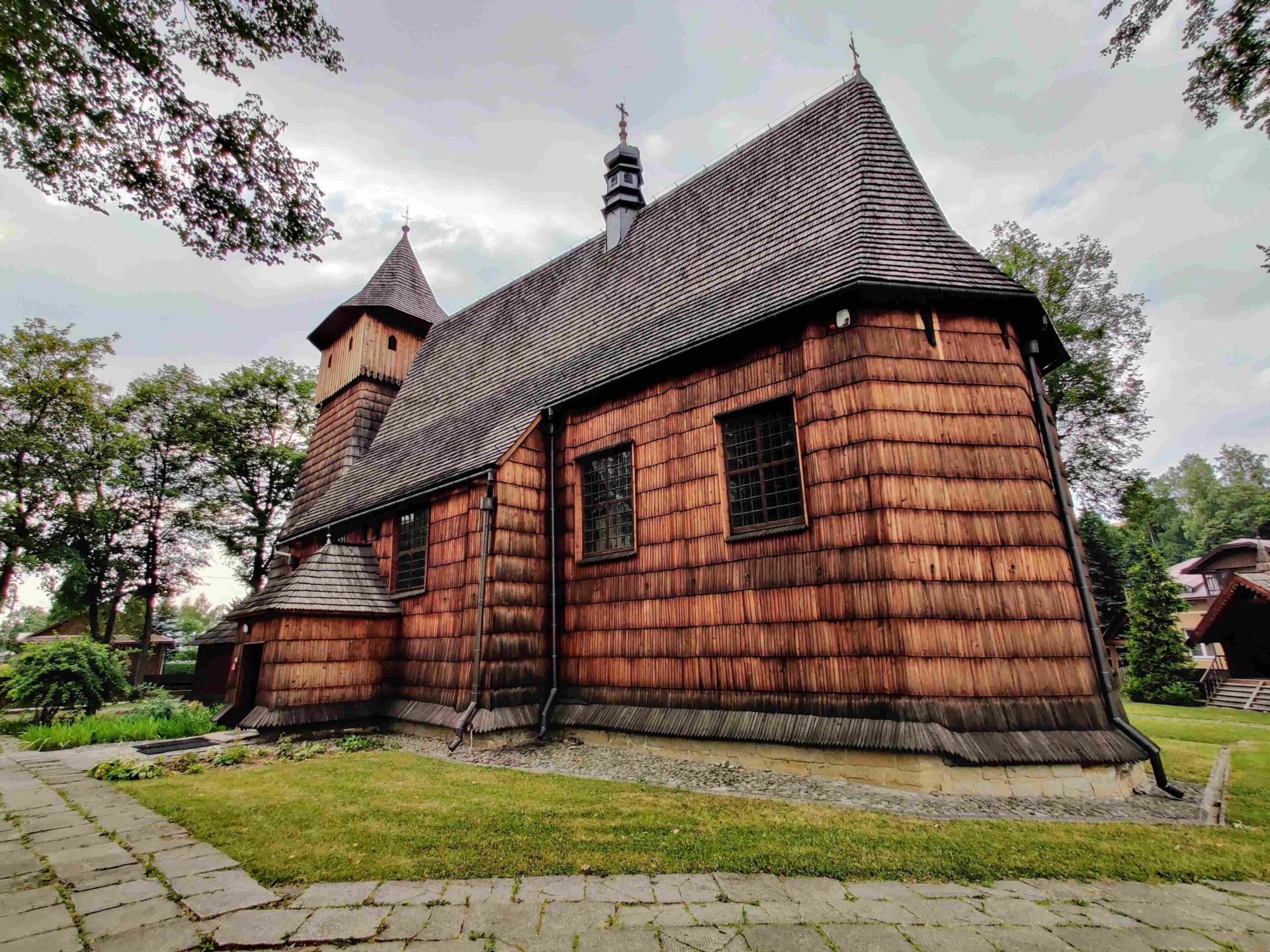 One of Poland’s two cross-border sites on the list, Park Mużakowski is an exquisite creation by Prince Hermann von Pückler-Muskau and his student, Eduard Petzold. A short trip from Berlin (yes, Berlin is that close to the Polish border!) not only is it a beautiful park and palace complex, but it serves as a major spatial planning influence after which new gardens and parks were formed, especially in the United States. Built in the first half of the 19th century, it coincides with both the romanticism and the beginning of positivism and encompassing both. Pretty and moody vistas typical for romanticism are accompanied by a concept typical for positivism - inviting the local population to blend in and enjoy the place.

The park covers the area of around 350 hectares, most of what is located in Poland and is divided by the river Nysa or Neisse. As both countries are part of the EU there is no physical border and one can easily access both parts thanks to the set of bridges. The closest big cities to the park are Dresden, Berlin and Wrocław. 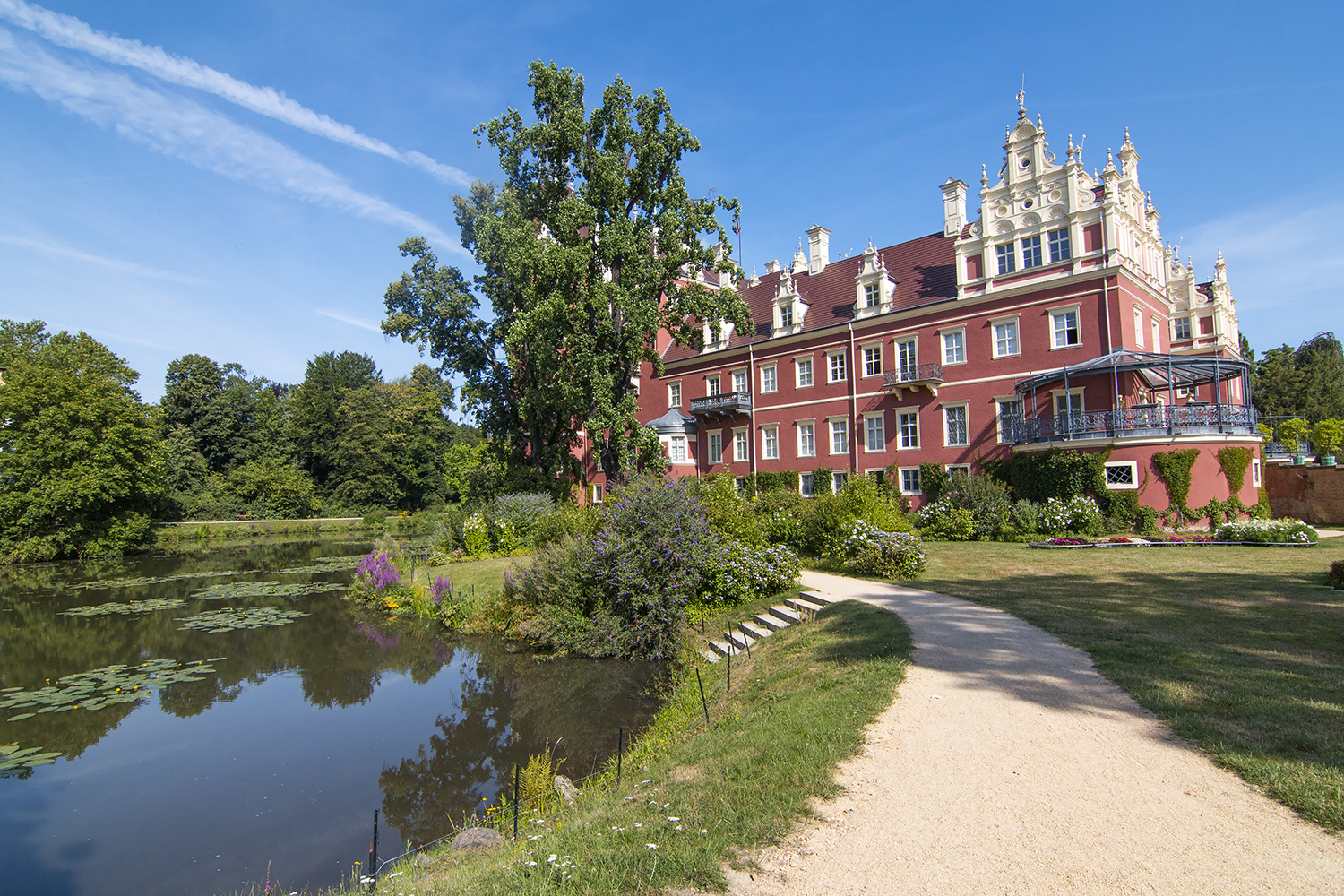 Staying in the west of the country west we visit the only UNESCO Heritage place in Wrocław, also known under its German name Breslau. The city is famous for its 9 Nobel Prize winners, birthplace of the Red Baron and over 100 bridges and 21 islands and a gothic town hall adorned by the picturesque old town. As much of it was destroyed and later reconstructed it is the Centennial Hall that represents the city’s architectural prowess on the list.

Built to commemorate the 100th anniversary of the Prussian mobilisation and fight against Napoleon it was an architectural predecessor to many of the world's great concert and event halls. The building was planned along with the whole complex of constructions: a pool, pergola and a Pavilion of the Historical and Artistic Exhibition, now known as the Four Domes Pavilion and designed by Max Berg and Hans Poelzig. The main hall was made of concrete and houses up to 10 thousand audience members and serves up until today. The whole spatial plan of the Hall was intertwined with the nearby Szczytnicki Park, where a special Japanese Garden was arranged for the occasion - the Centenary was to be celebrated by a great exhibition of Silesia’s history and economic success.

Today the building and surrounding area serves the people of Wrocław as the recreational and event ground and is a popular tourist destination. 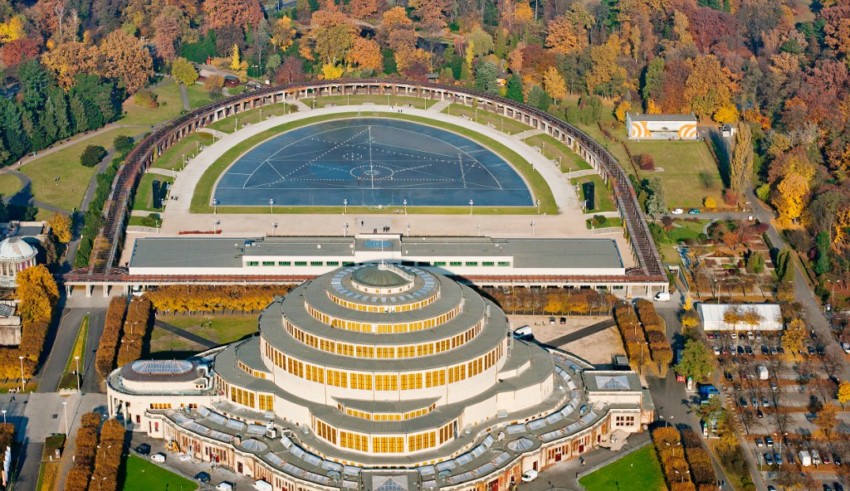 14. Wooden Tserkvas of the Carpathian Region in Poland and Ukraine (2013)

Owing to its location on the verge between Latin and Greek Christian influences in the early middle ages eastern and southern parts of Poland are dotted with Orthodox architecture in the shape of wooden tserkvas (cerkwie in Polish) - places of worship of Polish, Ruthenian and Wallachian orthdox denominations.

Located in the remote valleys of the Carpathian Mountain range on the borderland between Poland, Slovakia and Ukraine there are still hundreds of those wooden marvels to see and 16 most representative and old were included on the UNESCO list in 2013 - 8 in Poland and 8 in Ukraine. Differing from their older Catholic counterparts mentioned under number 10 of this list, the tserkvas were mostly built over the 17th until 19th century and may look even more exotic to a westerner’s eyes. Tall, toppled with onion-shaped domes towers adorn the small prayer halls - one for priests, one for men and one for women.

As this is the most personal entry in the article for me I want to encourage you to have a look at 3 most beautiful and mysterious ones: the tserkvas in Kwiatoń, Radruż and Chotyniec. See the differing styles of architecture: one with tall tower and perfect, slim proportions, second, the oldest of the bunch, with more quadratic construction and a cemetery ground around and third with large domes above the prayer halls. This is a melancholic picture of the pre-war coexistence of different ethnic and religious groups in this region. Although still present, the scale is miniscule and today most of the orthodox churches were transformed to serve the catholics. 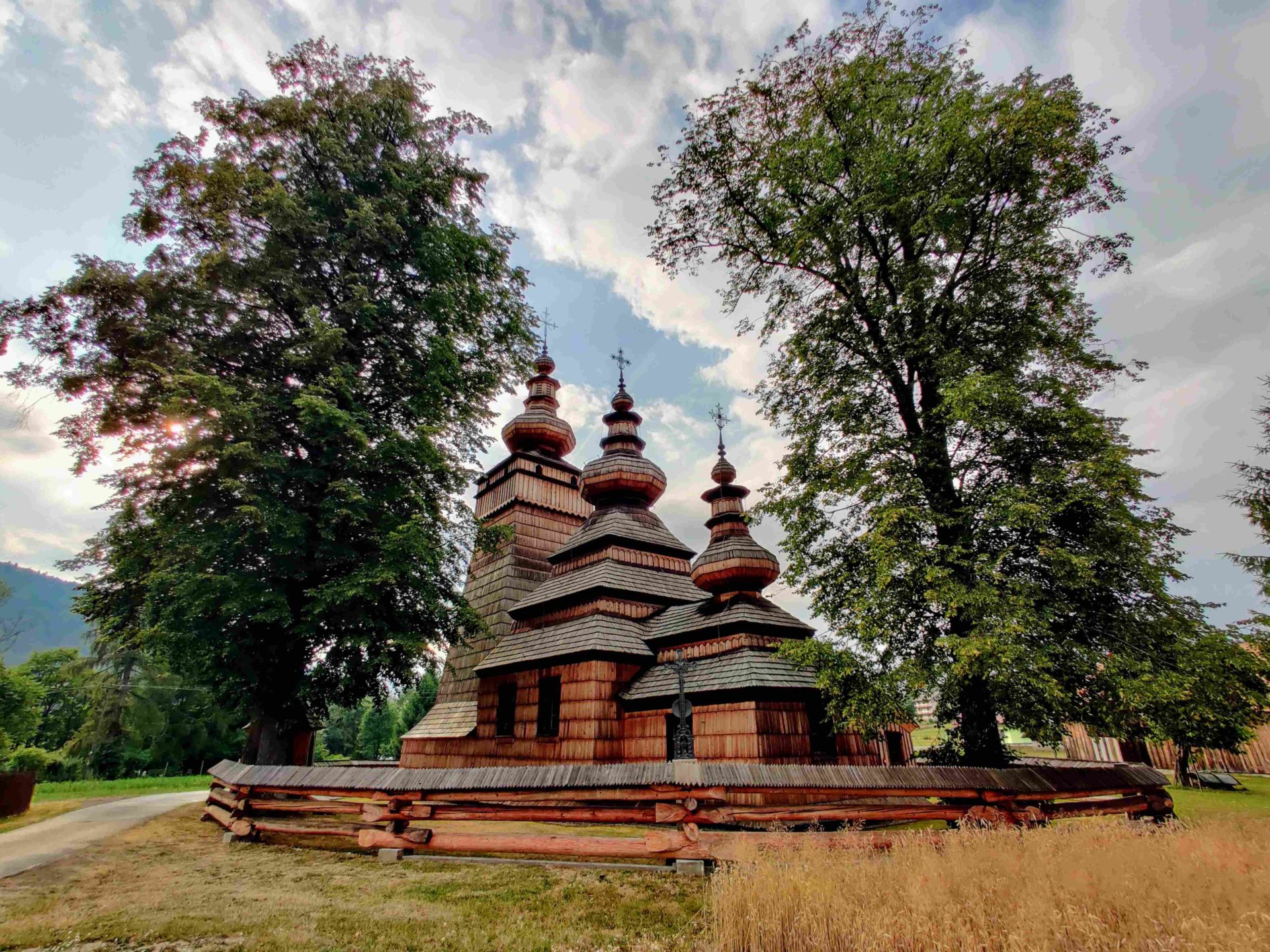 15. Tarnowskie Góry Lead-Silver-Zinc Mine and its Underground Water Management System (2017)

Yet another of Poland’s unique mining facilities, Tarnowskie Góry, located some 20 kilometres away from Katowice and less than 100 from Kraków. An enormous set of caves with an ingenious water management system. Developed for over 300 years between the 16th and 19th centuries the system eventually became a pioneering piece of engineering providing water to the region.

Apart from the special water system the mines were one of the largest providers of zinc and lead in the world.

Located in the Świętokrzyskie (Saint Cross) area this particular mining region is a testament to much older human activity and might just be the most important entry on the list from Poland given its historical importance in the development of humanity.

Dating back to the Neolithic and Bronze Ages (around 3900 till 1600 BC) the place features one of the biggest flint mining facilities in history. Flint was used to produce axes, which in turn served the community to prepare food and shelter. 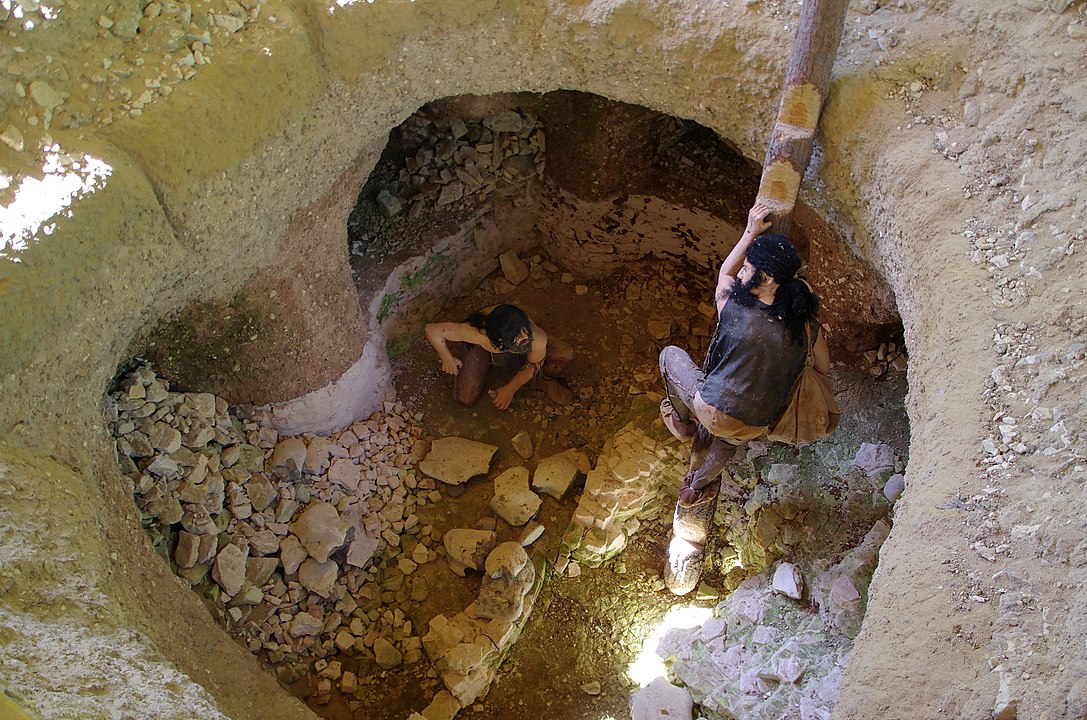 These are the most representative Polish tourist attractions: that does not mean they are the only one, but if you are looking for a place to start this might be the good idea. Feel invited to peruse through our blog and website to find even more ideas for a perfect visit to Poland!