It is THE time of the year! The season of joy, happiness and family time. And while some traditions remain the same no matter where you go, every nation, even every region has its specific customs and traditions related to Christmas. You should know by now (especially after reading some of the articles in our blog) Poles are the masters and great lovers of TRADITION, so let us bring you closer to many quirks and customs of Polish Christmas. 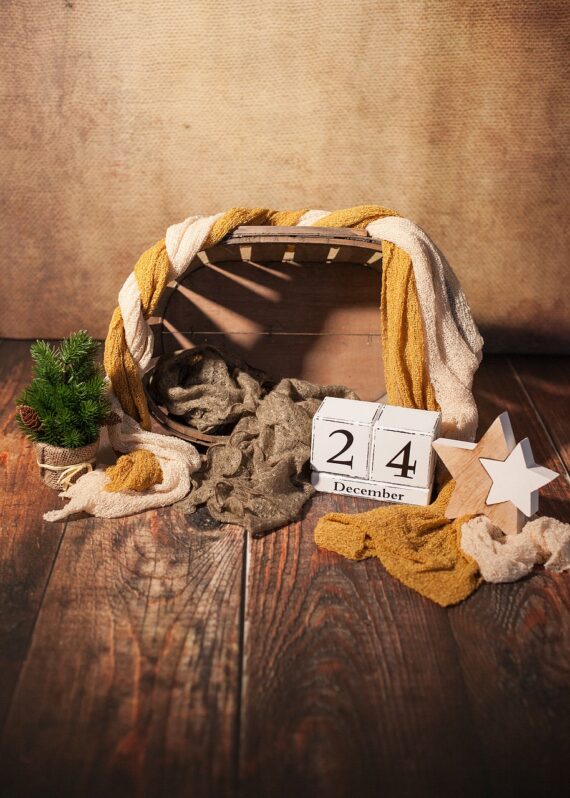 Aaaaand we have the first surprise for you here - for Poles the most important day of Christmas is not the 25th, Christmas Day, it is the 24th, Christmas Eve! It is called Wigilia, which comes from the Latin verb vigilare, “to wait”, which is a religious reference to the expected birth of Jesus. This day is the centre of all the celebrations. Most people work shorter hours on that day, and families gather in the evening to begin… the marathon of eating. It is generally believed that no one should spend Christmas alone, so often during this time people meet their long unseen aunts and uncles who undoubtedly ask them some uneasy questions…

But certain conditions must be met to start all the festivities. First of all, the Christmas tree - traditionally it should be decorated exactly on this day, on Christmas Eve, and it should be done by the entire family. So much tradition - nowadays most families decorate the tree earlier, about a week before Christmas. 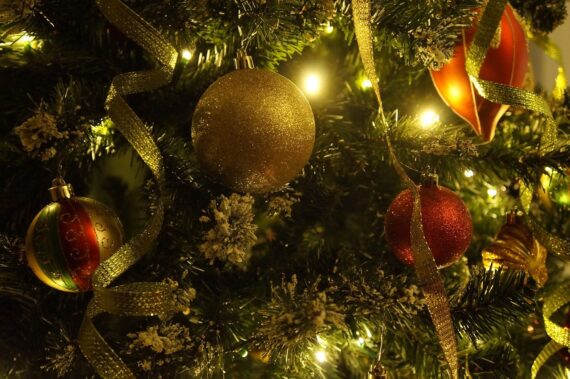 Now, once the house is all shiny and decorated, everyone should get ready. You ought to know that we do not practise wearing Christmas jumpers at all. It is just not a thing in Poland. If you are ever invited for Christmas Eve and spend it with a Polish family, make sure you dress elegantly! Certain rules also apply to the setting of tables. First of all, you leave one spot empty for an unexpected stranger who might knock on the door. In a more profound meaning it is a place you leave for the family members who are no longer with us but on this day we feel a spiritual bond with them. Besides that, there should be some hay underneath the tablecloth. Why? To remember that Jesus came to this world in a stable, on hay. 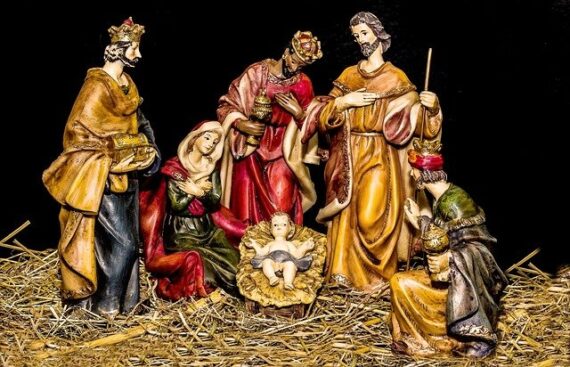 Once this is done, everyone awaits for the signal to start the feast. What signal you might ask. Well, this is the moment when kids sit in windows with their noses pressed against them waiting for it - for the first star that shines in the sky! It is a reminder of the star that guided the Three Kings to Bethlehem. 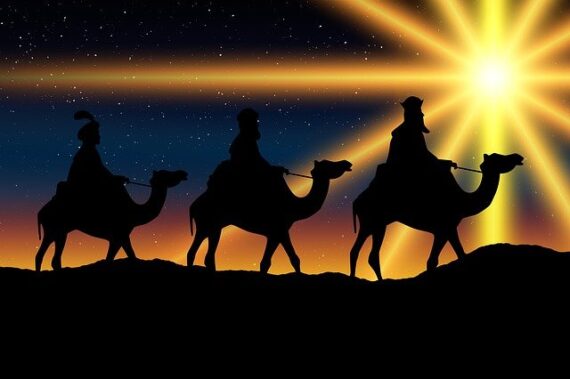 And one last thing - before we start eating, we share opłatek. It is an unleavened wafer that everyone gets and shares with each other while kissing, hugging and wishing them the best. In the countryside there is even a tradition of sharing the wafer with the animals who are believed to speak on that very night! Then finally the feast begins. 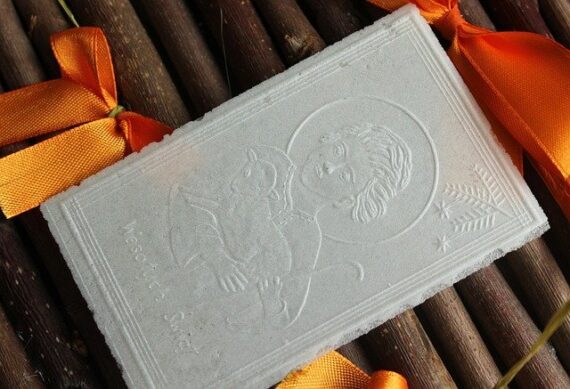 The 12 dishes of Polish Christmas Eve

There are certain things you have to eat and can’t eat during Polish Christmas Eve. Let’s start with what you can’t have (this we can sort out quite quickly!): the rule is simple - no meat is allowed on that day (but there is a lot of it on the days that follow!). And now what you must eat? There must be 12 dishes during Polish Christmas Eve, and you must at least try all of them! Why 12? It symbolizes wealth, 12 apostles or 12 months of the year - pick one! The 12 dishes may vary depending on the region and are usually cooked only once a year, for this very ocasion! Here are some, most common examples: 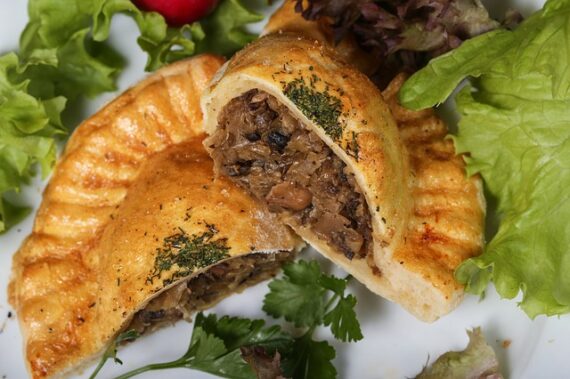 Dumplings with cabbage and wild mushrooms. 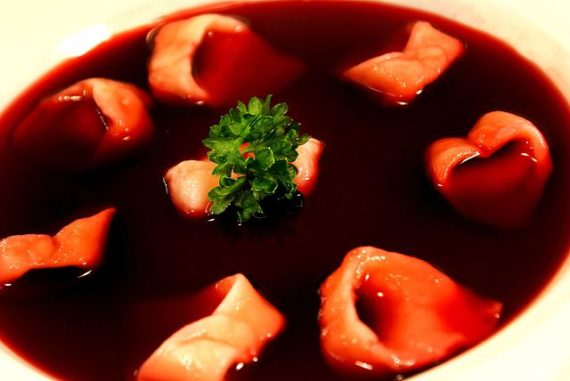 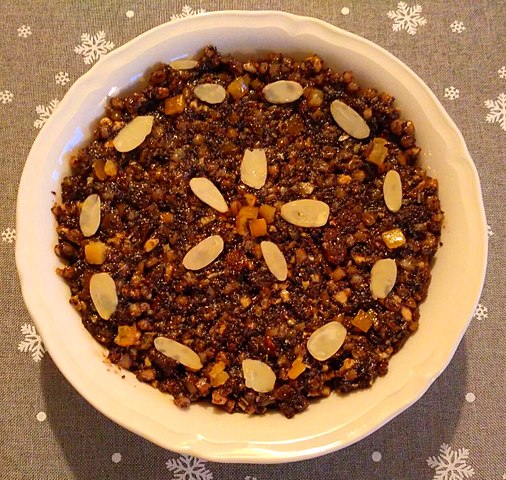 Curious about regional dishes? For example, in Silesia where our office manager, Gosia, comes from, they eat moczka and siemieniotka. Moczka is a sweet dish prepared from gingerbread, almonds, raisins, dried plums, dried apricots, pears, dried figs, dried dates, hazelnuts all soaked in dark beer. Siemieniotka is a hemp seeds soup. To prepare it hemp seeds are cooked, separated from shells, ground into paste and mixed with milk and honey. In turn, in Zosia's (she is the one answering most of your calls and emails) home in Podlasie (north-eastern part of Poland) they eat special kind of donuts, not sweet but sour - stuffed with cabbage and mushrooms.

We could go on and on about regional dishes so let’s stop here. But if you are interested in traditional Polish cuisine in general, there is more to read here and here you will find dishes we prepare for Easter.

When all the food is gone it is finally time to let the kids dive underneath the Christmas tree for presents. They usually appear there miraculously at some point of the dinner. I know it is a torture to make kids eat all that was described above and wait seeing all the presents sitting there but hey! That’s the tradition and you don’t mess with it! And yes, Polish kids get their presents on Christmas Eve, not Christmas day! But it is not the end of surprises. They don’t get it from Santa! And they get it twice during the Christmas season. More on when and who brings gifts in Poland you can read here. 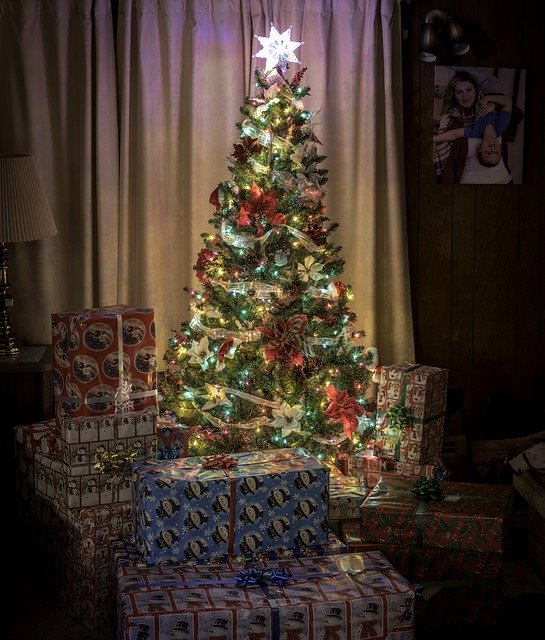 While the presents are being unwrapped and your stomach full (on the verge of explosion) the caroling begins. This tradition is very strong and old - some of the Polish carols are of late medieval origin! There was even a time when an 18th century carol “Bóg się rodzi” (God is born) was considered a candidate for Polish anthem!

Singing carols can last for a very long time. Especially in my home in Podhale where we sing not only standard carols but also typical for this region pastorałki - kind of folk songs related to Christmas, sung in typical Podhale gwara - the highlander’s dialect.

I am sure you have noticed that Polish Christmas is a dream feast for both vegetarians and pescatarians 🙂 Fish is also told to bring luck. Maybe not fish itself but definitely the carp husk! My mom always leaves them for all the family members to put in their wallets so everyone will be financially thriving next year. And let me share one more, a bit nasty maybe, thing about carp - it is not happening much these days but when I was little carp would occupy our bathtub for a day or two before Christmas Eve. And then just before dinner… my dad (and other dads in Poland) would kill it himself! A bit horrid I know. All because carp is best when it is fresh…

There is another superstition related to Christmas Eve - we believe that how Christmas Eve goes is how the whole year will go, so everyone tries to be super nice to each other the whole day. Pretty tiring I am telling you!

Many would do one last thing this evening - attend the midnight mass, pasterka. The name can be translated to shepherd's mass and is commemorating the simple folk - shepherds who were first to visit newborn Jesus.

After Christmas Eve you wake up the next morning usually with a heavy head and heavy stomach only to realize that it was just the beginning! The next two days are the marathon of eating, singing, resting, digesting and visiting family members.

In the countryside caroling groups are still very popular so don’t be surprised if a bunch of (usually) youngsters dressed as goat, turoń - a horned, black and hairy animal with a snapping mouth, gwiazdor - starman with a star on a staff, devil, angel and three kings will visit the house you are staying at and demand money for their singing. Go ahead and sing along! 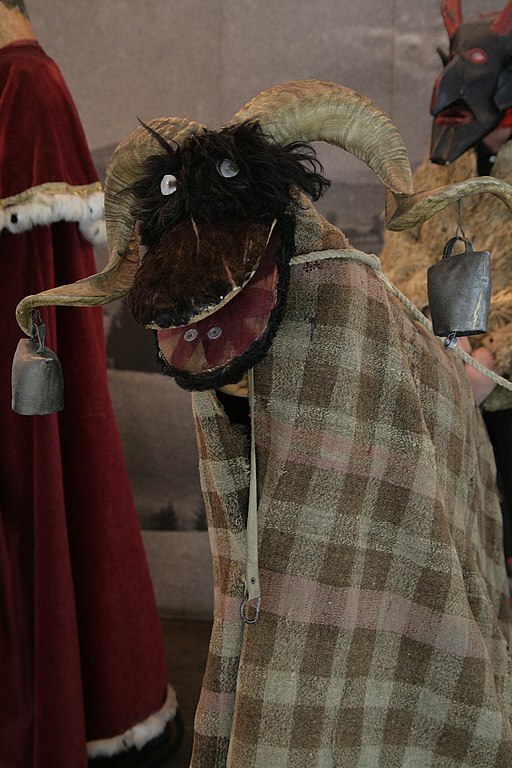 Turoń - one of the characters in the procession of carol singers. From the exhibition of the Ethnographic Museum in Kraków. ImreKiss Łukasz S. Olszewski, CC BY 3.0 <https://creativecommons.org/licenses/by/3.0>, via Wikimedia Commons 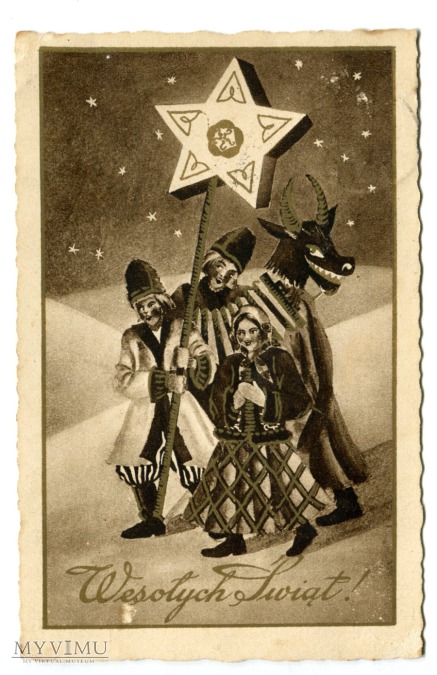 Carolers with a turoń on a Polish postcard from 1937.

In the following days your house is being visited by the local priest who comes with kolęda, sort of a neighbourly visit during which he asks about how life is, about your worries and joys. This is also when people (or the priest) write on their doors three mysterious letters “K+M+B” or “C+M+B” and the current year. What do they mean? Common tale tells you these are the initials of three kings that visited Jesus - Kaspar (Caspar), Melchior and Balthazar. Different interpretations claim it stands for old Latin Christus mansionem benedicat - may Christ bless this house. Choose what you will. In recent years, you see it less and less though - especially in bigger cities where people are becoming more secular and don’t wish priests, who are very distant to them, to visit their houses. It still remains a big thing in smaller towns and villages where people live closer to each other. In such places priests are usually treated to coffee, cakes and even full dinners!

Feeling like an expert now? You should! Go on and surprise your Polish friends with how much you know about Polish Christmas traditions! And have yourself a very merry Christmas! Or how Poles say it: Wesołych Świąt!