How to Get Around the German Capital?

Berlin is not New York, London, or Tokio when it comes to the complexity of the public transport network. But it is still the largest city in the EU and one of the largest cities in the whole Europe. Almost 900 km2 (~ 350 mi2). No wonder it may be quite difficult to understand how the transportation system works here.

In this article, we give the general overview of Berlin transportation. We will also give you valuable tips so that you never get lost on more than 5,000 kilometres (over 3,000 mi) of roads and railways that run through Berlin. You will learn about the main city hubs, and what means you should use for different destinations.

Since 2021, Berlin has only one international airport - Berlin Brandenburg Airport (BER). It was opened in autumn 2020 after many scandals, critical opinions, and bureaucratic procedures. All in all, it took them almost 30 years to plan and complete the construction of a new airport on the outskirts of Berlin. 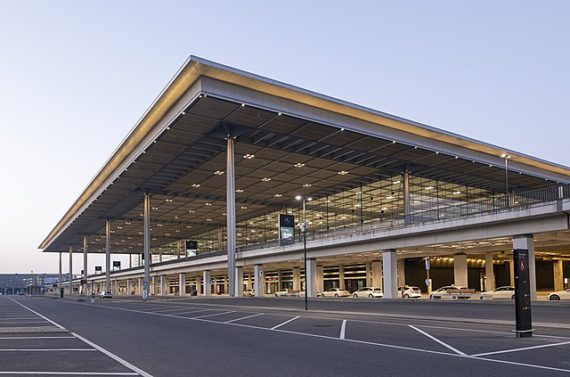 Berlin Brandenburg Airport Flughafen. Source of this and other photos: WIkiMedia Commons.

The Berlin Brandenburg Airport basically replaced and absorbed the facilities of the Schönefeld Airport (SXF). The latter was a well-known base for some low-cost companies like Ryanair and easyJet. It had been in operation since the 1930s and during the Cold War served as the only airport in East Berlin.

Another international airport in Berlin was Tegel (TXL). It was bigger than the Schönefeld and was located in the northern part of West Berlin. Interestingly, most people in Berlin voted against its closure at a public quorum in 2008, but the authorities did not change their mind. There are plans to convert this area into a massive technological park.

👆 By the way: until 2008 there was another airport in operation in Berlin - Tempelhof (THF). Actually, Tempelhofer Feld is a place full of history and worth a separate article. In brief, once one of the three largest airports in Europe (along with London and Paris), it was an ambitious plan of the Nazis. Then it became famous in the beginning of the Cold War, as it was a landing field for a famous Berliner Luftbrücke (Berlin Airlift - a supply system provided by the Western Allies during the first Soviet blocade of West Berlin - well before the Wall). Today "Feld", as it is known in Berlin, is the largest city park in Berlin and one of the must-see places for those who want to experience life in the German capital. 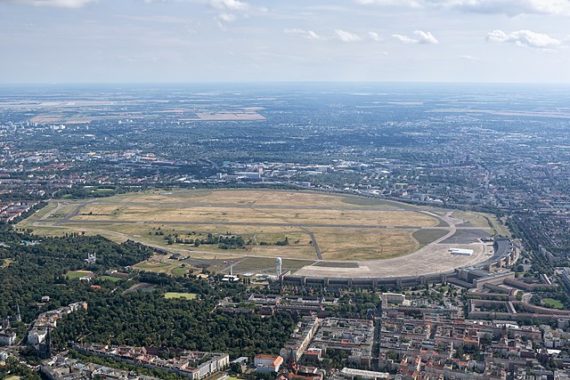 All railway stations in Germany are divided into seven categories: from rural stops with only one platform (Category 7) to massive traffic hubs, often with many levels and shopping malls (Category 1). Most of the Category 1 stations are central and are known as "Hauptbahnhof" (literally "main railway station") in German. So every time you see a "Hbf" sign, think of some massive building with many platforms and different trains (urban, regional, international). 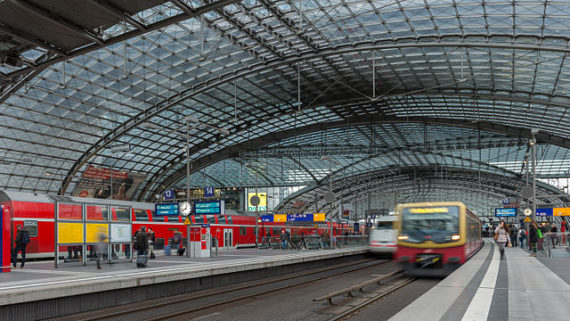 There are four Category 1 stations in Berlin:

So if you are at any of these stations, you will be able to get fast not only to the opposite corner of the city, but much further away: to other cities and towns around Berlin (in the Brandenburg area), as well as to other parts of Germany.

💭 Interesting fact: the Berlin Hauptbahnhof is the largest grade-separated railway station in Europe. 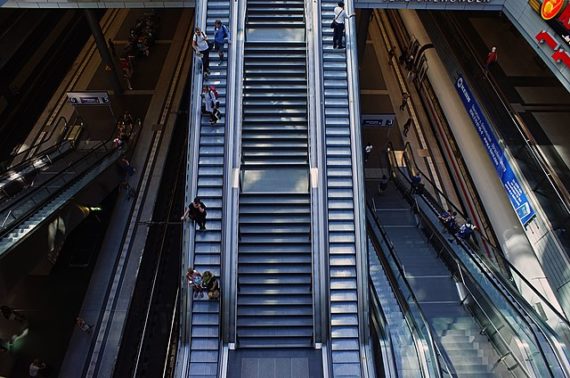 If you see a bold white letter “S” on a green circle, you are at or in front of the S-Bahn station. “S” on the logo stands for “Schnell” which means “fast” or “rapid”. The full name can also sound like “Stadt-Schnell-Bahn”, or “rapid urban/city railway”. It is the best way to travel fast around the city. For instance, if you want to get from one corner of the city to the other, S-Bahn should be your option. Besides, bus or tram stops are usually located next to S-Bahn stations, so you can easily change. 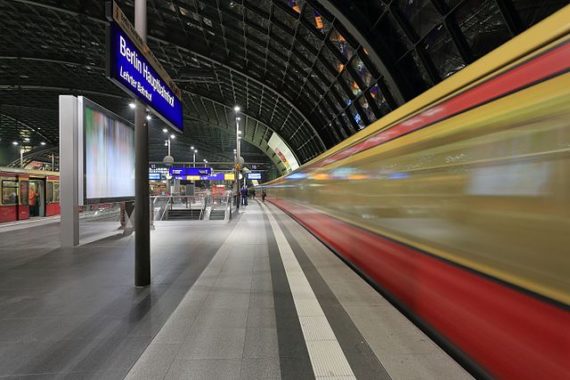 Attention! Some S-Bahn stations have multiple levels (normally 2) so if you cannot find your train, do not panic - it may just be on a different storey. 🙂

The Berliner S-Bahn is the oldest rapid transit system in Europe. It also connects the capital of Germany with multiple surrounding areas, including important tourist cities and towns like Potsdam or Oranienburg. 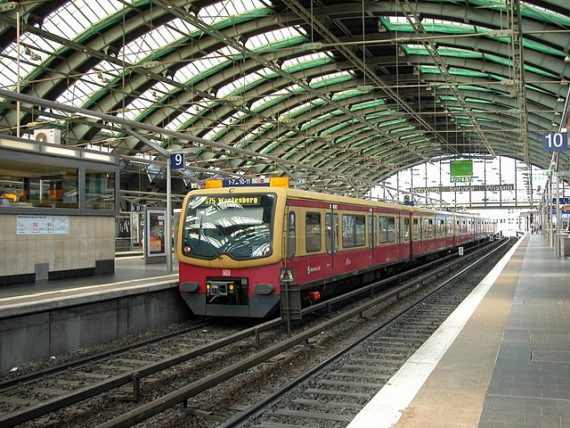 The Ringbahn (“Circular Railway”) is a line of the S-Bahn network. In Berlin, if you see “S41” or “S42” on an information board on the platform or somewhere else, you know that this is a Ringbahn train. In other words, these trains do not have an initial or final stop, they just travel around the area of the city centre. In two different directions: S41 runs clockwise, S42 runs counterclockwise. In many places, their circle route overlaps with other S-Bahn lines making it easy to get from the central area of Berlin to the farthest corners.

🤪 Fun fact: the Berliner Ringbahn circle route has a shape that resembles a dog’s head; that is why it is known as Hundekopf in German. 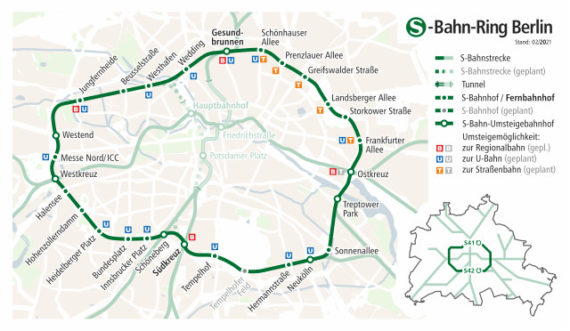 The underground, tube, subway, metro… In German, they call it “Unterbahn” (“underground line/railway” in English) or simply “U-Bahn”. The sign is a white letter “U” on the blue background. 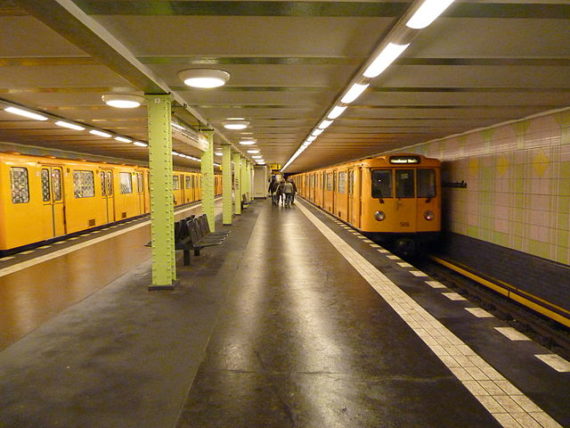 👆 Curious: many U-Bahn stations and even entire U-Bahn lines in Berlin are not underground. Many of them have tracks above the street level: they run on viaducts and bridge-like structures. The proper term for such elevated transit lines is actually “Hochbahn”, or “high railway” in German. But you will hardly hear or come across this word. Instead, the misnomer “U-Bahn” is usually and commonly used. 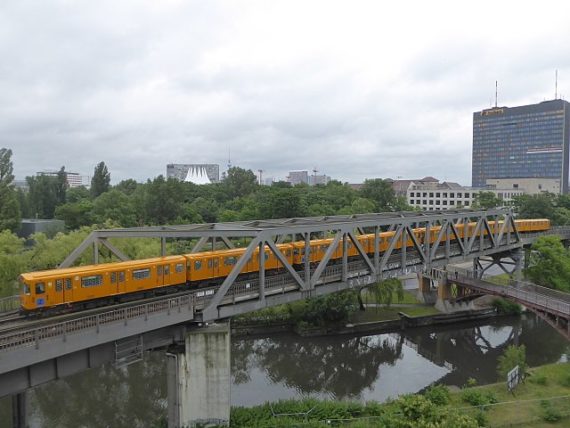 The German word „Straßenbahn“ means something like “street line” or "street railway" in German. The tram network of Berlin is concentrated in the city centre and the surrounding area. It is definitely not the most typical mode of transport in the German capital but it operates well. 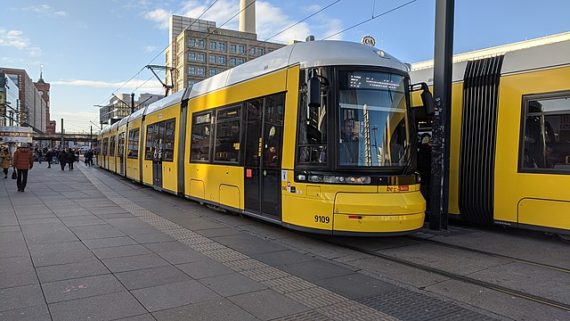 Most tram stops in Berlin are connected with bus stops.

You will see a red sign with white name of the line (for example, M4 etc).

Buses are probably the least favourite mode of transportation for many people in Berlin. Why? Because, like in most megalopolises around the world, buses are not very reliable compared to trains. Especially when it comes to their punctuality and speed. But it is an indispensable mode in many areas around Berlin where the buses are running like clockwork. 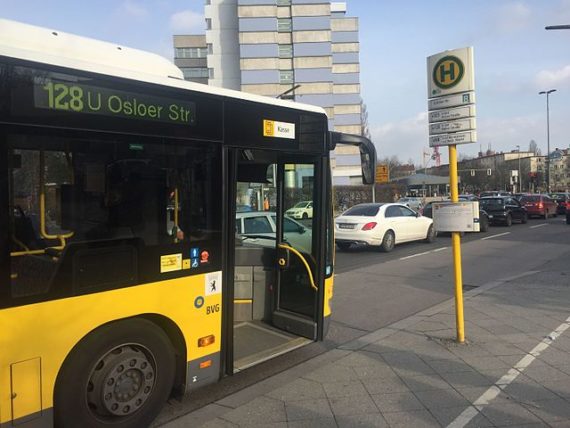 In Berlin, you will notice BVG everywhere. This abbreviation stands for Berliner Verkehrsbetriebe (“Berlin Transport Company”) which is the largest transport company in the city. They also have a good app which you can download and use for free.

🚌 Did you know about double deckers in Berlin? Inspired by red AEC Routemasters from London, the city of Berlin decided to buy and launch many double-decker buses. Now these yellow vehicles with two storeys are a special feature of the German capital. Their upper deck offers a nice view. The bus line #100 remains the most famous tourist route for sightseeing by public transport. 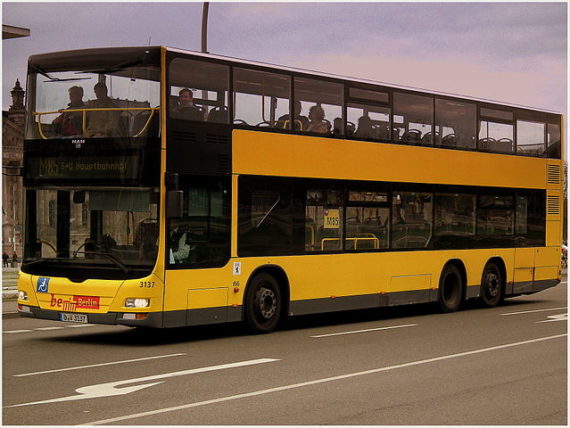 In Germany, just like in other German-speaking countries, you will see no turnstiles (ticket barriers) when entering train or metro stations. Instead there will be ticket machines and validating machines on platforms. So remember to buy and validate your ticket if necessary (not all tickets must be validated - see more information below). 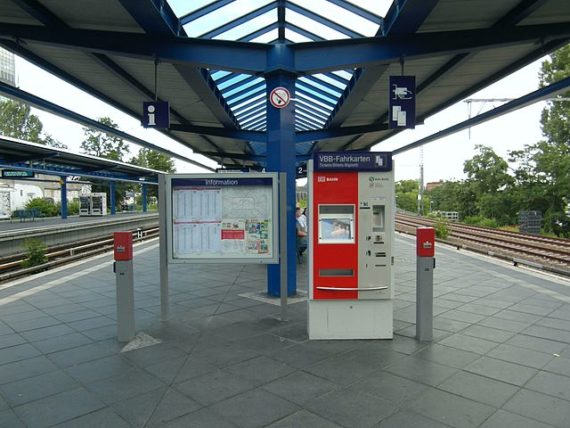 Inspection does happen. Often or not, it depends. You may travel a few months without a ticket and not be caught (we discourage you to do that :-). But you can also be caught and fined (up to 60 euro) a couple of times per day. Watch therefore, for you do not know the day nor the hour!

Tickets for transport in Berlin: where to buy them? Where, when and how to validate them? It all depends on what mode of transport you take and what kind of ticket you have or want.

U-Bahn and S-Bahn tickets should be bought and validated before entering the train! You will find ticket machines at all stations. Validating machines (normally boxes on poles) are found on platforms. There are no validating machines inside the train, so once you are in without a valid ticket, you can be fined. 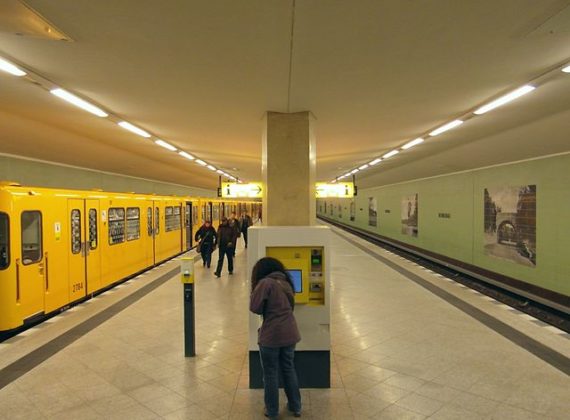 It is slightly different for buses. Again, it is better to buy a ticket in advance, since not all bus stops have ticket machines. There is an option to buy a ticket from a driver. You will find validation machines in the buses.

Trams normally (not all though) have ticket machines inside. In most of them you can pay by card.

Remember that you do not have to validate all kinds of tickets. Some of them are automatically valid.

Here is the list of public transport tickets that you will find in most German cities.

✅ Einzelkarte, or Einzelfahrt. It is a single ticket. You can use it for a limited time (usually around 90 minutes) and for different modes of transport. The ticket is valid as long as you are going in one direction (so no return journeys) and staying in the fare zone.

✅ Kurzstrecke (“short distance”) is a short trip ticket. It is cheaper than Einzelkarte. But you can use it only for a very short journey, usually two or three stops. Besides, changes are not allowed!

✅ 7-Tage-Karte is a weekly  ticket. Just like Tageskarte, it will be valid from the moment you purchase it (unless you set a different date as a starting period). So do not validate it in the machine. This 7-day-ticket is a good option for those who often use the public transportation in Berlin.

✅ Monatskarte means “monthly ticket”. The principle is the same as with daily and weekly tickets (see above). It pays off to buy a monthly ticket if you are going to stay in the city for over 2,5 weeks (if only two weeks, then probably buying a 7-Tage-Karte for each week will make more sense).

Always pay attention to fare zones! It is very important to have the ticket for an appropriate zone. There are three of them in Berlin - A, B, and C. The A fare zone is roughly the city centre and some area around it. B is the rest of Berlin, including the outskirts. C is basically the metropolitan area around Berlin; it includes many towns and cities in the vicinity. Thus, the farther you are from the city centre the more likely you will find yourself in the C zone.

If you have a ticket for the right zone, you can also use regional trains (for example, with ABC- or BC-zone tickets you can take Deutsche Bahn trains to Potsdam or Oranienburg - they are significantly faster and much more comfortable). In short, study the zone map (see links below).

We highly recommend you to download an official app of the VBB. In most cases, it works like clockwork. It has a schedule/timetable with all updates, a nice live map, and a great trip planner. Besides, you can buy tickets through it.

If you still feel a bit lost, worry not: most people in Berlin do speak English. The information at stops and stations is normally provided in two languages - German and English. And still, we recommend you to memorise (or just save this article for later use 🙂 ) these words that may come in handy while travelling in German cities.